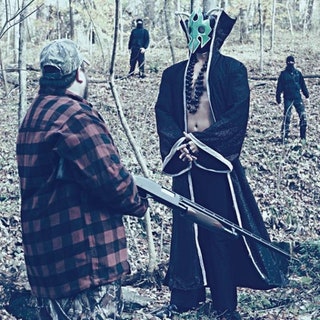 The other day, at Half Priced Books, I stumbled upon a surprise. Seeing the name, UltraMantis Black, there was far from expected, but that's the magic of HPB. Anyway, I actually used to own this but I lost the CD in a car accident that I was in a few years ago.

For those who don't know, Black is best known for his epic work in CHIKARA. This album features Pissed Jeans band members on backup, adding an extra level of flavor to this hardcore punk release.

The eight tracks are quick and violent, leaving you reeling by the end. Since it is actually less than 15 minutes, it could actually make a solid background track to watch wrestling to. I am partly reminded of Number 12's Put on Your Rosy Red Glasses and San Diego's The Locust due to this bordering on a grincore intensity and, despite seeming almost amateur at time, there is a decent level of depth here that makes it a fun listen.

Truth be told, this album is far from being the most original or creative, yet it is a fairly good CD and I give UltraMantis credit for his vocal delivery which was certainly the best part.

Give it a shot if you enjoy the genre and a fan of wrestling, even if it's just for novelty reasons.