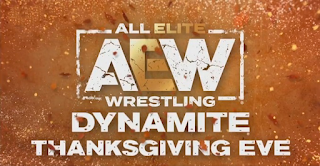 Regal kicked us off and announced that MJF wouldn't be appearing in Chicago. The heat was solid. Mox arrived and demanded answers but Danielson held the former champ back. They're gonna fucking milk Regal leaving, aren't they? Why the hell is Bryan being a little douche here?  The dude slapped Mox, apologized, then begged, then rambled on and on. This was pathetic and I felt like it was far too fucking soap. How did a segment with these three dudes suck this bad?

The Lion King shit was the only thing I liked and even it was cheesy as fuck.

"Thank you Regal" chants from fans that I'm sure thought this was it for the dude in AEW.

Swerve wants to talk with Lee...

Next, the first match of the show...finally...

Hager wore his shitty ass hat and tried to win the All-Atlantic Championship. He failed. Their buddies were involved a touch, but not in a negative way that subtracted from the quality. Honestly, it was a fun throwaway TV outing as Orange continues to be a fun champ pumping out strong defenses.

He's really trying to make the best of this title reign.

Too bad he never got a shot with the Grand Championship. He should've been given the nod over that sex pest, but CHIKARA apparently really liked sex pests so perhaps it makes sense why he never wore that belt.

QT and The Factory come out to fuck up the vibes.

Julia Hart bring some better vibes to the party and House of Black destroyed everyone. Excellent.

The Eliminator Tournament saw Ethan Page fall to Starks in about 13. Hathaway was sent off near the finish and the heels played their roles well enough to really make Starks' eventual victory fell like a big deal. Ricky's run in this tournament, truly a Battle Ladder on hard mode against a set of monsters, was pretty fun and they all did good to really get the fans behind the dude.

I'm hoping they keep the momentum going on the dude. I'll find out pretty quickly, I suppose.

Wardlow wants his belt back.

Jade went to a concert and other things happened that I didn't care about in the slightest.

Match two of the series between Pac and the Lucha Bros and The Elite saw The Bastard wearing a shitty mask meant to protect his nose. It also saw the six men work a 14-minute spotfest spectacle. They didn't surpass the first match, from Full Gear days before, but it was still a fantastic contest and everyone looked good as a result.

At one point, Kenny decided to bite Pac's arm as a nod to the All Out drama which was admittedly funny and the GTS later was perhaps even better.

The champs used a hammer to move to 2-0.

Thunder Rosa was announced as having forfeited the strap next, making Hayter the official instead of interim Women's Champion. Renee made the announcement. The fans were cool with it and so am I.

The champ and crew came out. Baker took the mic, stopping Hayter from getting a shot to say anything. A three-way tag team match followed and saw those two against Willow and Skye as well as TayJay AS. Sadly, the contest wasn't really that great, but it served enough of a purpose or whatever that it was fine.

They are going to retroactively remove the "interim" from Storm's reign, which I approve of.

Top Flight and FTR is set up for the Ring of Honor Tag Team Championships. Sweet.

The Acclaimed are out next, of course with a solid few bars from Caster as they entered. It landed pretty well and the fans were hot for 'em.

We closed Dynamite: Thanksgiving Eve with a fantastic main event. Ishii continues to be one of the best dudes in the game and he and Jericho fucking killed it here. A strong pace, large amounts of violence, Lionheart's chest bleeding buckets worth of human meat juice, and a buttload of fighting spirit.

The finish was especially entertaining.

After, Jericho wanted to continue his attack on Ring of Honor staffers. Claudio stopped him quick to set up their Final Battle match.

Fuck yes to that entire portion of the show!

This installment of Dynamite started with some awful TV but honestly the rest of the show was largely pretty good. The main event really elevated it, especially, and the entire thing ended up being another decent installment of AEW's flagship. I'd also add that this did well enough as a follow up to Full Gear. 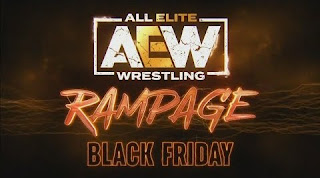 I have two final pulls (and a few segments) for this set and they come from the Black Friday edition of Rampage.

If you want good adjacent news, this was pretty good stuff and a decent enough TV title match without admittedly really hitting the peaks either team are capable of.

Next, Claudio came out to interrupt Jericho and his society and begged for a shot. His past as a sports entertainer was brought up and Jericho's nipples got hard. Apuesta style, Final Battle match was indeed set up.

If CC lost, he'd be forced to join the JAS. Admittedly,

Claudio's mic work remains a bit rough but I love the dude too fucking much to care.

Have you ever played that Wrestling Empire game? This felt like a promo you'd see in that game.

Storm and Renee had a chat backstage. Good shit.

Last up, I skipped the match but did see Ten turn on the Dark Order. Rush wanted a new friend, I guess.