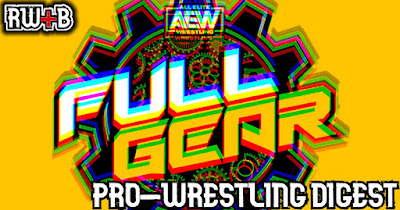 So, first off, I should note that the preshow on YouTube did exactly what it should have:

Delivered a crowd pleasing event with the goal of trying to get some holdout buys while pumping up the live crowd.

The opening, after we had the expected collection of packages and rundowns, was a competent, crowd pleasing clusterfuck clash and something that I'd argue was a rather perfect representation of what a match in this spot aught to be. There were a few production choices that had me nervous for the show ahead, but they largely evened out as things went along.

The Danhausen stuff was legit.

Page was on commentary for the Eliminator match. Cage started hot to lean into the David vs Goliath stuff as Starks continued his battle ladder of monsters. Eventually, the wounded babyface overcame the machine, but admittedly the slap to the head made me pop the most. Good, overall, and I did appreciate the story aspects.

The Fight Forever game ad has me hopeful for the title.

Kingston's emotional backstage moment was a perfect lead in to the main event of Zero Hour. The dude truly is a modern Foley.

Eddie and Uncle Jun worked a love letter to the 80's and the amount of respect on display here was truly magic. You could tell how important this battle against the 5th pillar was for Kingston. I loved this one and Eddie's response after as well as his amazing mic work really ensured that this was perhaps my favorite Zero Hour installment yet.

The show proper started with a fantastic cage match. I'll admit that the program felt a bit longwinded, but they did well enough to ensure that there was still some gas for them to burn off here. It actually felt a whole lot like the classic cage matches from older days. I really appreciated the intensity level and the old school vibe deserves a lot of praise.

The Trios defense, later announced as the first in a best of seven series, was a car crash spectacle of masterful athleticism, top shelf drama, truly professional action, and a touch of color for good measure. I consider this one of my favorite 2022 outings and an amazing display of how fucking good all six of these men are at what they do.

The TBS Championship match was trash TV ending with a trash payoff. Apparently Schiavone thought this was a good idea for a program, for some reason. Other than the Eddie style entrance from Nyla and Guerrero, this did little for me. They tried, but both require the right opponent matched up against them and they did not gel well at all.

At least Thunder/Deeb had a good payoff.

Jericho put up The Ocho in a four-way next and the unit focused drama and storytelling throughout, especially in regards to Sammy/Jericho stuff, were really enjoyable. Everyone worked hard and delivered big, ensuring that this was a good example of a match where even those that didn't win still did. One of my favorites of this stacked show.

Saraya and Baker tried hard to make Knight's return a real epic, but a bit of rust covered the effort levels and ensured that this sadly never hit those peaks. Still, I'm hopeful that the artist recently known as Paige can continue to progress back to form because you can tell the passion still burns. Just enough to be good, but below real recommendation levels.

Big meat hit big meat and Joe won the TNT strap from Wardlow. Match six is that simple and it was good shit.

Jericho versus Ishii and Orange versus Hager is set up backstage.

The no disqualification tag was better than expected, to be honest. I mean, they went with the chaotic brawl layout that Sting and Darby have been using for a while now and it worked pretty well. Even Singh and Dutt's stuff added instead of subtracting.

I'll say it was pretty good, though they got too cute on the finish and fucked it up a tad.

Moving along, Hayter dethroned Storm with a little help from her friends. While it was admittedly overbooked, I still thought it was ultimately another fantastic contest from the evening and a nice bit of evidence at how awesome this division has become.

Sadly, The Acclaimed and Swerve in Our Glory was a bit below expectations. It's hard to truly complain though because it was still great stuff and, with a bit of fat trimmed off, it could have been even better. High drama throughout and a truly hardworked affair.

Keith Lee's split from Swerve will be remembered more by some but I wonder if it'll be a majority or not.

This closed with a huge pop for MJF, Mox being forced into a heel role, and a shit load of stuff after. Between the nearfalls, the selling, the big spots, Regal's involvement, and the ref bumps, you have one hell of a ride on your hands with this one. I guarantee it'll be polarizing to all, including those reading this now that missed the match live like myself, but I personally felt it was one last four-star range showcase from the show and something that was booked competently even if I didn't necessarily agree with the way it went down.

MJF getting the nod was certainly the only option, though.

In all, I'd say that Full Gear kept the tradition alive that AEW has developed. You see, their PPV events continue to be perfect representations of where the brand is at the time that they first air. The talent always steps up and does their best and most of the matches somehow end up overdelivering despite large expectations being consistently present. Full Gear was yet another high quality event from the modern WCW and a treat to watch. If I had to argue anything strongly in the negative here it'd be that I think AEW special events need to be 3 hours long, 4 with the preshow, instead of....well, these marathon shows.

It is a bit taxing.

Outside of that, this was basically a must-see event and if you skip the TBS defense, you'll have an even better time.