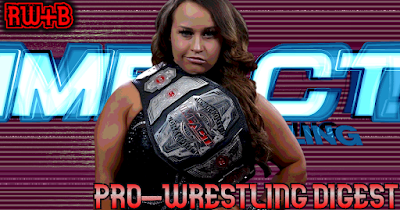 Honestly, when watching through Impact content, I realized that Jordynne Grace's second reign as Knockouts Champion deserved a quick spotlight edition of the Pro-Wrestling Digest. A quick side note, but I did the same for Alexander and Yuji recently...for those that might be interested.

So, how's Grace doing with the prestigious championship?

1. Up first, we have the Queen of the Mountain match that saw Grace win the strap. Steelz walked in champ. These types of matches can be good for running protected title changes but, instead, here they had Grace best the champ before winning the match. Note that the King/Queen of the Mountain gimmick is hard as hell to make watchable but this was actually pretty good shit and a nice way to kick off the run.

2. From Against All Odds, we had Grace besting Steelz in about 12-minutes to prove she is indeed Queen of the Mountain. Steelz played cheap heel and a bit of manger interference added a numbers game dynamic for the champ to overcome. Note that I really want to like Steelz and I appreciate her energy. She's just not fully formed as a worker, in my opinion. I'm also a dumbass so fuck my opinion. Anyway, this admittedly felt more like a TV main event but it was fairly good shit overall and served nicely to solidify the reign so the new champ could move on.

Can we get Chihiro versus Grace 2 soon? Please!

3. Her defense against Mia Yim at Emergence was simply a borderline great semi-main event contest with two of the best stateside women's wrestlers going to work. A good showcase for both and the champ got a pretty nice victory to pad her reign.

4. Fuck yes, this one rocked! Gail Kim, Awesome Kong, Taryn. The Knockouts division has a long history of excellence thanks to strong efforts from some of the best women's wrestlers of all time. Grace and Masha put this one in the catalog and, simply put, it is one of the best contests ever for this belt. That's saying something, people! They lit a fire here and kept it roaring right up until the bell rang, making for a fantastic battle and a must-see title match.

5. An 11-minute TV main event, this could have easily been a simple and forgettable throwaway defense. Instead, Shaw and Grace stepped up and put in for a memorable encounter. The champ pushed the challenger and brought out a fire in her and they worked a very good, borderline great, title match as a result.

Masha would destroy the champ after.

6. We close with a rematch. With their PWG match, which I hope to check out soon, this makes it their third go, for those keeping track of the Masha/Grace rivalry. Adding the Last Knockout Standing stip here was a nice touch, too. Both used the 20+-minutes to deliver big, once again giving fans like myself something to praise. A fitting follow up to their Bound for Glory match, building off of the promise made and delivering big on it. I applaud both for their efforts here and I'd absolutely love to see them run it back again in the near future. Perhaps a lethal lockdown or full metal mayhem match next time? Either way, this one was fantastic stuff and another must-see battle of fighting spirit!

They beat the shit out of each other...

Jordynne's run at the top of the Knockouts division has easily been one of the best reigns with the belt that we've had in a long time, which is saying something. She's one of the hardest workers, regardless of gender or geography, in the game right now and I urge fans that have slept on the division to fix their fuck up now. Watch the Masha rivalry if nothing else, but know that there are a lot of gems here that are just waiting for you to pick 'em up.