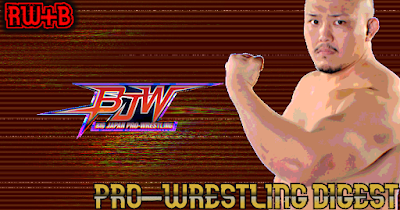 Big ass muscle mountain, Yuji Okabayashi, is one of my favorite active workers.

Because the dude is simply entertaining as fuck to watch and he presents himself as being one of the most likeable guys in the game.

This year he won the Big Japan World Strong Heavyweight Championship and has defended it a handful of times. It's about time that I not only watch and review the matches, but to do so in a spotlight style digest. He fucking deserves it, people!

1. The first match I actually reviewed earlier in the year, but it was a near MOTYC battle. Their 2021 match was admittedly a hair better, but this was still such a strong showing that I urge fans to watch it. Kicked off the reign on a very high note, too!

2. Next, Nakanoue and Yuji had a fantastic battle. A good intensity for sure and Yasufumi's fighting spirit deserved some praise. Two big dudes getting stiff in a nonsexual way.

3. The Strong BJ duo once again kicked each other's asses and fuck it all, this rocked my tits off! Sekimoto was his normal, charming self and brought the heat. Yuji was Yuji. I consider this a MOTYC and a must-see battle of beef. Check it out.

4. Yuji gave Sou his best match in our 4-spot. Sou is a dude that clearly tries hard and is pretty decent, but he also reminds me a lot of an American trying to wrestle like a Japanese wrestler and I'm not sure why. What matters is that this was borderline great in general and a decent throwaway defense in general, though admittedly a bit rough around the edges overall.

5. #STRONGHEARTS' Irie challenged next, once again falling to the big man. I actually am a big fan of Shigehiro so this one was something I was really looking forward to. While I know for a fact this could've been better, it was still a fantastic battle and both worked hard to deliver big. It says something that this could be this good yet still be slightly disappointing, doesn't it!?

6. Last up, Hashimoto got a go but Yuji continued to be too damn much. They leaned into past encounters a bit which was a nice touch, but it was also a tad rough around the edges. Great, but also admittedly one of the weaker matches of the set.

I figure that Yuji will be dropping the strap to Kamitani on the 2nd of January, but I could be wrong. I admittedly would be fine with the big pile of red meat holding the strap for another year if it means we keep getting these kinds of matches for the belt, but perhaps I'm in the minority. What matters is that Okabayashi killed it this year at the top of Big Japan's Strong division and I urge all fans to give these defenses a look.