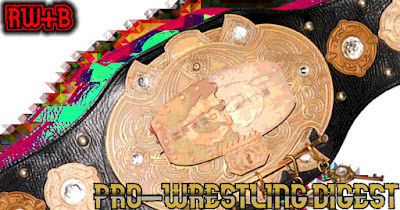 Yeah, I know that isn't the current Dream Gate belt. I still like the image. Oh, and a quick side note but if you're waiting for The Elite to be back in AEW, they'll be back soon. The segment that aired tonight on Dynamite was a statement, too. Today is Punk's birthday. The drama backstage is already resolved but they wanted to wait until today.

We start with the Takeshita 10 year anniversary match against his long-time rival, Daisuke Sasaki. If you watch this fantastic battle and want more, know that they have had several other top shelf encounters. I'd specifically recommend starting with their 22nd Anniversary show contest if you only want one more, but I would love to elaborate on more options perhaps in a future rivalry spotlight edition of the digest or something.

Anyway, this was a respectful, respectable showing from both men and a fitting throwaway addition to their ongoing series. I appreciated the effort and am, as always, thankful to the professionalism that I have come to love and expect from these two. It was on full display here in this dramatic, entertaining chaos disguised as a wrestling match.

Moving along, keeping with DDT, we have Cara Noir and Ueno from Who's Gonna Top? 2022. I've been really enjoying Cara Noir everytime I've seen the dude so I was eager to see this one considering my respect for the champion, too.

The gaijin made a good impression, I'd say. The endstretch had a nice intensity level and climaxed hard. Great shit. Noir almost died.

Last from DDT, Higuchi defended the KO-D Openweight Championship against Takeshita. It started with a nice energy and they did well throughout the ebb and flow in a way that both served the match nicely as well as the competitors themselves. This was a must-see defense and a fire of a fight, folks. Big fight shit!

Because of the awfulness of the past few months, I've found myself cutting my pull list down drastically. These two felt like worthwhile watches, at least. I actually urge you to watch the two Who's Gonna Top? matches in this order as one feels like a nice appetizer for the other.

Next, Kenou and Kaito with the top prize of NOAH on the line. I actually watched the english commentary version and thought the commentary crew did a far better job than expected. Long time visitors of this site might remember when I had a bootleg NOAH series and the commentary style I had when I dubbed it. I shouldn't expect that to ever be official but I did dig their style. It matched the tone of NOAH nicely.

The battle of K's was an exciting new chapter in their series. IX was yet another fantastic entry and I actually must say that their rivalry over the past four years has been an excellent ride. Perhaps one of the most underrated rivalries in the past decade.

I think this was a clean builder that featured some call back storytelling and drama amid strong in-ring physical work. The hits were on point and the spots landed rather well. Check this one out, for sure!

I'm in awe of Kaito's development the past five years. That belt is a potato right now.

Next, episode 151 of Dragongate's Cutting Edge Battle!! series to close us out.

This was the rise of Yuki Yoshioka and saw him best KAI to claim the Dream Gate strap to start things off. They followed that up with a match Yuki had the very next day, defending against Kota Minoura.

KAI's run at the top of the company was okay but far from some of the previous reigns they've featured over the years in terms of quality. He was a serviceable vet and did well enough. It was time for a change and Yoshioka is a nice, bold choice worthy of a shot. DG has been more than willing to test things out in the past and I've often found myself applauding their vision of the future over the years.

I find myself doing so here, keeping a trend alive.

Match one of the installment was a borderline great battle of fighting spirit, with the younger talent refusing to stay down for the vet until he eventually managed to put together enough offense to claim the strap.

After, Kota walked out with his key, a shot at the built, to remind the newly crowned champ that it would be best if he waited in celebrating.

We closed the episode with that match, seeing KM challenge YuYo for the strap. The former played his role as heel rather well and made for an excellent starting opponent for the champ. It really says a lot that this year's Kobe series of shows, their WM, featured these two contests as their main events. A real dedication to the next chapter, people!

I urge fans of the brand, or those interested in seeing where they are heading, to watch this. It was a rather enjoyable episode in general, but those two groups would likely be the best targets.

With that, I say goodbye for this edition of the digest. Thank you, as always, for stopping by.