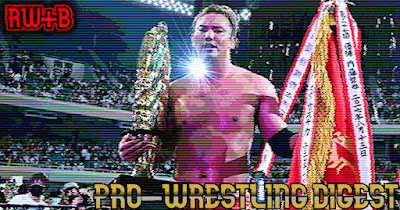 Because I'm an old fart with far less free time than my site would seemingly suggest, combined with a love of wrestling, I have to once again admit that I need to streamline shit down. Here's a lovely pile of puro goodness. There's more to come.

Up first, the ace of DDT, and one of the best workers in the world, Takeshita. I'm so thankful that he got a chance to wow fans while working in AEW this year. The dude deserves every bit of love and respect that he's finally getting. No gatekeeping here, folks. He and Endo, another guy that needs more love from fans, have had some great matches together so my expectations were rather high here.

Treat yourself to some goodness from the two.

They worked hard here in their 7th installment and delivered big. This one was perhaps beat out only by a hair by their Peter Pan match a few years ago. Still, a gem worth your time and a top shelf title defense in general.

Next, Go and Kaito with the vacant top strap of NOAH on the line at Majestic. I haven't checked in as much this year on the company but remain a big fan of the roster. Here, we have two of my favorites going to battle. They worked their asses off, like usual, giving a match in front of 2,000 that should have been in front of 20,000.

Watching Kaito's growth over the past few years, since his return from excursion specifically, has been a treat. Watching Go's work in general during that time was a treat as well.

Fantastic stuff that did very well to represent what makes NOAH so damn fun.

Two MOTYCs in a row.

We move to the terribly named GLEAT (the discharge fed) and we have El Lindaman putting up his G-Rex Championship against Motherfucking Irie! I actually really have enjoyed this company so far and am very excited to see what's next. I also appreciate seeing El Lindaman as the top dog of a company. A giant inflatable T-Rex costumed mascot should second whomever is holding the belt at the time.

They don't have the intestinal fortitude to do that, though.

Anyway, this #STRONGHEARTS spotlight actually was even better than expected and kept a theme going as far as ratings go. I fucking loved the way they built this one up and it felt like a statement moment for the company.

Watch that one ASAP!

G1 Climax action continues, building off of the last set, starting with Okada versus Tama Tonga. It's been a bit strange seeing Tanga get this little thank you push of late for his loyalty but I kind of get it. He can honestly be okay in the right spots and he stepped up here. I think what he wanted out of Bullet Club just wasn't possible and it makes sense for G.O.D. to run a different direction, even if success will remain minimum baring some major shift behind the scenes.

This encounter was honestly something that overdelivered, in my opinion at least.

Tama was a very serviceable opponent that truly made Okada appear to have to work hard for his spot in the finals. The action and drama were respectable and I thought the entire package was fantastic overall. The finish-spamming, counter heavy end stretch was particularly fun.

Ospreay and Naito in a semi-finals match was next. Holy shit, folks! I will forever want Naito to win everything in New Japan, but regardless of the outcome I have to say that this was a nearly perfect storm of athleticism. Run to this if you skipped it.

The finals were a classic deserving of the spot and was a five star epic between two of the titans of the art. It amazes me at how many people leave Okada out of the discussion when it comes to "best in the world".  His battles with Tanahashi, Omega, Naito, Ospreay, Shibata, Kota, Ishii, Nakamura, Suzuki, and Shingo are more than enough evidence at how fucking amazing he is.

Here, we had another addition to the catalog.

That feels like a perfect place to stop for now. Thanks, as always, for reading.