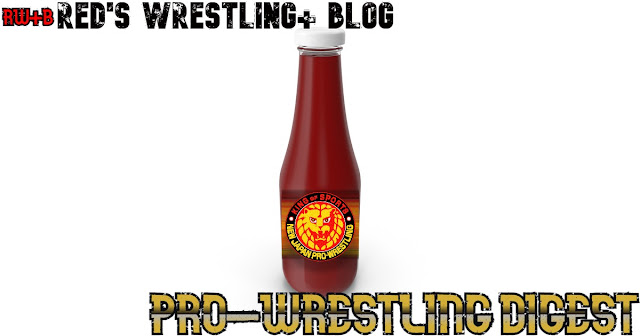 In their current form, it's hard to argue against any statements suggesting NJPW houses the best (or one of the best at the very least) rosters in the game. It's the rest of those on payroll that are the issue and it's resulted in lower interest levels at the same time that they are continuing to try to push a more international product.

Whatever, I am just here for the killer content.

We start with Ishimori defending the brand junior strap against Hiromu which was every bit a fantastic junior battle as I had expected. A bit rough around the edges but in a way that actually added to the intensity levels as a result. I appreciated Bone Soldier's limb work and the big spots sprinkled throughout worked nicely to keep a solid flow. They brought flames and walked through it all, putting in for a quality performance worth recommendation.

Next, we have a handful of G1 pulls. I'll be watching the tournament coverage via the AXS program. Did anyone else enjoy their Roku run? No? Hard to blame you, I suppose.

This episode featured the next two matches on the review list above.

White and O-Khan was the first to bat and it exceeded expectations. I'm still very torn on the GoK to be honest but he's over-delivered a few times and worked well versus Jay who was in full-dick mode here. White is so fucking good, people. The dude is a star that has excelled in his spot, doing far better than anyone could have predicted at filling Omega's spot in New Japan.

Fantastic yet simple. The finish was a nice visual.

Clips from around the tournament followed. Sabre is fucking awesome.

SHINGO and Ospreay closed us and it fucking rocked. These two continue to kill it time and time again and umber 5 in their series was balls to the wall, well paced action with sequence after sequence delivering the entertainment and drama in spades. I ramble because I care, people. Anyway, yeah they nailed it once again and the fire here was off the charts.

This episode fucks. Watch it wolfpac! Yeah, I'm calling y'all the wolfpac now.

I have to admit, I really like the way this show presents the product. I'm digging the vibe and appreciate the approach. It feels like a strong way to watch the show and I might continue utilizing it moving forward.

This time around, we start off with El Phantasmo taking on Juice Robinson in a battle of Bullet Club unit members. It was very DDT and heavy on the comedy, though they picked up steam and intensity as they went along. Eventually, a DQ finish out of frustration capped us off. This was entertaining, but far from must-see.

The head-through-table spot was memorable, at least.

Jonah and Okada was very well done stuff. I'm very happy for the former, getting shots like this after his WWE run turned out to be such a let down. Okada, of course, is a god level worker and can make just about anyone look good. That's not really what we had here, though. This was a god level talent lined up with a great worker and they put in for a fantastic contest that is destined to be a sleeper for far too many.

If you can't tell, I indeed recommend this one. The outcome alone makes it worthwhile, to be clear, but the ride to get there fucking rocked, too!

A spirited promo from the big man followed as a nice cherry.

This episode featured a comedic friendly fire opener that built up a bit and finished with a top shelf battle. You could skip to the second half, but it honestly worked well as an entertaining episode in general. Up to you, but if you missed this content at least consider pulling the trigger.

With that, due I'm closing this set. I'll be back for more ASAP. I continue to battle against a clock, one-handed. Thanks to all that stopped by.