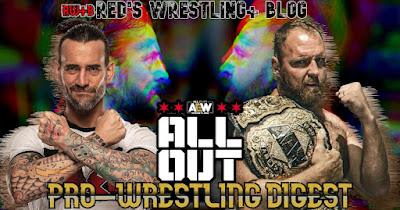 I only watched one match from the Zero Hour preshow and it was an epic rematch. Kingston and Ishii worked their asses off here and worked a match that would have certainly put a smile on anyone that considers themselves a fan of the genre. Even the single mistake of the match wasn't terrible and Eddie turned it around right after. I strongly recommend this one to fans and urge all the watch it, even if you've already seen it.

I can watch them chop each other for another ten minutes if they're willing to do so in the near future. There will be no complaints from I.

The main show started with a polarizing ladder match. There was a lot of entertainment value here, but the finish truly hurt the quality by a lot. Doing shit like this, the type of thing older TNA would do, can be okay if the endgame is worth it. I trust the brand enough to believe I'll be rewarded soon as I continue to catch up, but it is impossible to deny that this would've been a better match without the shit finish.

The latest chapter in the in-ring Elite drama was as good as I had expected and yet another MOTYC entry in the catalog. Page and Kenny's spotlight moments were especially sweet and the story work here was top shelf. Near fall drama, building action that ebbed and flowed. In short, fuck yes!

Athena, Jade and her entourage, and Mark Henry had a backstage segment. Stokely was then missing from ringside for the match that followed. Jade bested Athena is a very short title match. I had hoped for more, was given far less. It was still wildly entertaining, warts and all. Perhaps the length was in their favor if we're being honest as both looked good here and the logical outcome occurred, too.

Short but sweet best summarizes it.

I'm cool at this point with them getting Jade to 50 or even 100 if they want.

The women's tag belts should be here sooner than later. I've been told that in the past too though so who fucking knows at this point.

Punk cut a promo outside to push the main event.

Impact's Motor City Machine Guns finally got a chance to work in AEW as they teamed with Jay Lethal next to face FTR and the TNT Champion, Wardlow. This one was a big question mark in my mind. The talent here were more than capable of giving us another MOTYC, for example. There was a buzz despite the minimalistic build, too. The debut, Wardlow, and FTR's fans helped a lot in that last bit.

Anyway, they put in for about 17-minutes and it wasn't too shabby. I can't say they nailed it, though. Instead of a big PPV 4+ star range contest we got a decent AEW level TV match at least. It is a bit hard to complain considering. Note that FTR are dramatic ass fuck sometimes and are just as likely to split to WWE as they are to stay, but they're also so fucking good that I don't really care. I mean, I'm down for another DIY vs FTR match, people.

Oh, and Wardlow's rise has been far more fun than expected so I am cool with him getting the pinfall over Lethal clean here.

Samoa Joe came out to save the faces from the defeated heels after and a funny, heart warming moment aired to close the spot. It felt a lot like something you'd see at a house show or after the cameras go out at a TV taping.

Starks and Hobbs followed. I thought they actually did pretty well to sell the big dude as a menace. It wasn't too long as to overstay its welcome either and the intensity level worked for the circumstance. Hobbs admittedly still seems a bit green at this moment so I am unsure of the call here, though.

Starks could be a semi-main event level dude right this moment. Hobbs really still has another year or so of reps to go through before we see if he can be a big name player. They're trusting in the latter for sure and I am hoping it pays off. It'd be great to see.

I loved the abrupt ending, for what it's worth.

Mr. Ass and his adopted children that love to scissor had a chat with Lee and Strickland backstage while Tony held the mic.

Caster's rap game was on point this night.

Rock beats scissors and that they did on this night, too. It was a MOTYC and one of the best tag matches AEW has played house to (which is saying something). I was admittedly surprised by how fucking good this was if I'm being honest and I can easily say this overdelivered! A thrill ride and watching The Acclaimed and their rise has been one of my favorite parts of following this company.

High quality work and strong story telling with a fire crowd. I know they apparently got an even hotter reception a few weeks later when the outcome, in their hometown, was apparently electric so perhaps not running an audible here was smart.

The women's four-way was a bit below expectations, as a counter to the last match I suppose. The formula for these is pretty easy, but this lacked that flow that would've worked far better and the entire thing didn't hit right. Baker and Hayter had some movement and Storm got her moment, at least.

I know that the talent is there in the division, but it's not showcased properly and continues to underdeliver at times, tragically.

Christian and Jungle Boy, as Jack Perry, was certainly something. Luchasaurus was a dick, Christian won. Fin. Adding to the story, nothing more nor less and not much more to say about it, either.

Best Friends versus Death Triangle is set after. That'll be fun.

Lionheart vs American Dragon was far below expectations, but felt like something you'd see on an old WCW PPV (in a good way) in vibe. I truly enjoyed this, but something didn't gel right.

Sting, Miro, and Darby bested House of Black (with Hart looking like she's in Fleetwood Mac) via a fun finish that saw Sting spray mist into Black's eyes and Allin get the pin immediately after. This kept a theme going of matches that underdelivered. Good, but far below what it should have been.

We closed with Punk dethroning Mox and then MJF making a grand appearance in post. A great main event and a solid angle to close the evening? I'm all in on that even if bullshit followed backstage. Kudos to the former Dean Ambrose, too. The dude has been a workhorse for Tony and has stepped up in every situation he's been given. This fucker deserves nothing but absolute respect.

Watching this show so much later, especially after all of the shit that followed, feels a bit weird. I'm still glad I finally found time to watch it though it was all over the place. A smart show that should've been better? I appreciate the competence, at least. In many ways this show did a great job representing the current state of AEW, which is largely a good thing. It's a flawed product for sure and the backstage drama needs to fuck off, but AEW is still a very enjoyable source of entertainment and well worth watching. They've helped set a bar higher here in the US game and whenever things don't turn out perfect it's treated as if it's the end of the world while they simultaneously get little credit for setting those expectations so high in the first place.