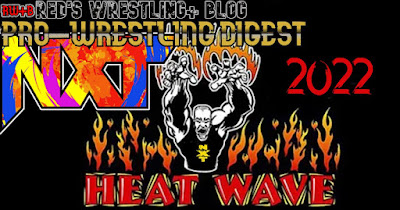 I completed my August WWE themed digest but realized this show missed the pull list and, honestly, it sounds fun. How does NXT feel shortly after Vince fucked off?

Anyway, we started with an athletic North American Championship defense that had the effort but lacked a bit in execution and was overbooked down the stretch. Hayes is a good mid-card champ for the brand as it is right now so him retaining was logical enough, at least.

Worked as a battle of former friends, Jade and Perez got the intensity level about right and they certainly worked hard. This finish made sense while ensuring this felt like a building block along the way to something else. In a vacuum, it was generally good.

A street fight filled the three-spot and saw Escobar and D'Angelo featured a crazy tope and a bit of ringside circus shit. In many ways it felt like a more polished ECW match and Tony D pulled out and got the nod here. I enjoyed this for being a spectacle, but it was a bit mishandled at times. Your mileage will vary greatly but I largely found it to be good without hitting true recommendation levels.

The semi saw the brand's women's strap on the line. While the division is perhaps the weakest it's ever been, I applaud WWE for continuing to showcase it more often than some promotions are seemingly willing to. Many episodes have two or more women's matches and there are a few plots ongoing in the division, too. I know a lot of the narratives on WWE's improved treatment of their female identifying talent are stretched or completely fabricated, but praise is due here.

I actually really liked this match, too.

Zoey was over decently as a sympathetic babyface and the layout they went with here really helped Mandy Rose come off as a valid champ. Perhaps the best match I've seen with Rose if I'm being honest and Zoey deserves a lot of credit for her role in making that a reality.

I guess name changes are still happening, sadly. Devlin...sorry, JD, is a great worker with a lot of baggage. Breakker is a super green powerhouse that has a lot of potential. The latter also can be pretty good with the right dude lined up against him or with enough smoke and mirrors at play.

The image of JD standing up, with color, behind the champ was pretty sweet. The entire thing in general was solid and very story focused at times, too. There was certainly a vibe that latched onto the evening.

Breakker, of course, landed the W and a face-to-face spot aired post between the NXT and NXT UK title holders (at the time).

Note that there were a few segments I largely skipped past from the installment, too. Diamond Mine drama was very soap opera in style before Gallus ran out to clear things. That and Indi got a letter that Davenport tore up. I have nothing to really say about this stuff but I know some do enjoy this stuff so perhaps you'll be more interested than I was.

I appreciated a lot of the effort on display, but NXT truly is a developmental brand right now to the core. With that said, I'd actually call this show a success. It was competent enough and had an attitude about itself that worked decently. It also got reps for a bunch of the upcoming stars and pushed angles forward. I can't recommend it on quality alone and, in fact, don't strongly recommend a single match from the show as required viewing but sometimes just a quality edition of wrestling that at least feels fun and like effort was placed into it can be enough.

I also am a guy that sincerely enjoyed 205Live for a while there, so fuck what I think.

P.S. Here's this for no reason at all.