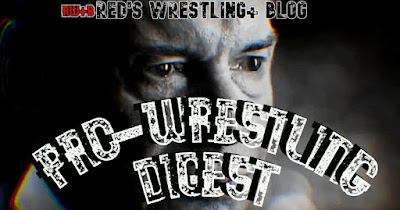 Here I start to close out Vince's reign at the top and the material it produced. I could comment of that entire situation, but all that needs to be said is likely already done in some form somewhere and I'm simply glad he's out. Oh, though I should note that THIS didn't age well the second it happened but has hilariously gotten more sour since.

I'm using a combination of DVD's and YouTube for the pulls.

The three-way women's match from Hell in a Cell was fantastic with a strong pace and loads of fun spots. There were a few shaky moments but I enjoyed it far too much to linger on them.

Cody and Seth's last chapter in their awesome 2022 program was full of drama of different degrees, including the image of Cody's gruesome injury to the numerous callbacks and nods throughout. It combined quality action with enjoyable storytelling. Their series of matches were truly a treat to witness and this was a more than worthy addition to the catalog. MOTYC!

The week that followed, Seth attacked Cody following an okay segment. HERE is a recap.

Riddle rambled and Paul added a stipulation. If you care.

The next package saw Judgement Day turn on Edge and Finn joining the group. Why the fuck not. I'm all for Balor having something to do and he's a good heel.

On NXT, Frazer and Santos had a very good throwaway. The smooth Euro and the crisp Lucha Underground standout gelled very well and their hard work overcame the sports entertainment antics. Props.

McIntyre tossed Dunne aside on his way out, hit him later with a claymore, and had a fun brawl with Sheamus. It ended in DQ after the two exchanged chairs like they were lightsabers. I'm not sure why that would be a DQ. They continued to trade shots, with...sigh...Butch getting in on it. This counted as a MITB qualifier. I had a lot of fun with the circus shit and am excited to see how it moves forward!

Gunther beat Richochet in a decent match, winning the IC strap. It wasn't amazing but the change felt like a sudden choice and it's hard to argue against Walter holding gold. I'm hopeful he'll be working more to his normal standards with HHH in charge, though. I hope that's true of Ricochet, too.

I caught the end of Riddle and Sami. Fun, athletic, entertainment. Matthew "I'd Beat My Kids if Not For Weed" Riddle won, Paul watched in horror, and The Usos beat down the stoner for his troubles. A series of crutch shots sent the heels packing to end the segment and to fade out the episode.

Note that the last three were all from a single episode of SmackDown. That's kind of a big deal and a bigger episode, clearly, than usual.

Seth and AJ had a decent, athletic contest with a flashpin finish. Not enough to rate, but fun for what it was.

We move next to one of the best matches of the set, with Riddle and Reigns working hard and giving us a fantastic televised championship match. The pacing and drama worked well and the action picked up nicely to form a true climax. Worth seeing for sure.

Roman bragged after. Brock appeared and sent a message. They're running it back once more.

Asuka and Becky's late June contest, a MITB qualifier, started hot and kept things moving along nicely up until the final seconds. Asuka kicked Becky's head off to get the W as well as the spot in the ladder match. Good shit.

Over to the UK, in taping date order, we have Ilja defending gold against Wolfgang. Simply put, it was great and worthy of the main event spot. The brand, at the point I am currently at, at least, remains a fun source of action and any show with Ilja as the top dog gets my eyes!

Another qualifier? Sure. Shinsuke and Sami didn't outperform 2016 encounter. Not even close. They did, though, put in for a fun, short TV match with a fun finish. Sometimes that's enough.

On the same episode, Gunther largely dominated Ricochet in the rematch. It didn't last long, but was good shit regardless.

One more from this edition of SD which, again, appears to have been a good installment. Sheamus and Drew took on the tag champs while the Street Profits watched from the table. The brawling Europeans won and what ran was a good sprint. Not enough to rate.

Loads of vets, including "Daniel Bryan", Jericho, Angle, and more, gave props to Cena on the 06/27th edition of Raw.

Cena met Ezekiel which was clearly the biggest moment of John's life. He also met Theory, the indie version of Cena, Omos, and ran into Seth backstage. Good shit. This came after...

...this speech for John's 20th anniversary. The dude is a true legend and a man that could have, easily, been an even bigger star had Vince not held him back. Hot take or shit take? Anyway, this promo was pretty well done and worth seeing for any Cena fans (which should be everyone that enjoys pro-wrestling).

With that, I close this set.