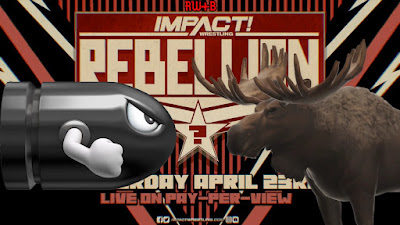 This one started with a great three-way match featuring Jay, Maclin, and Sabin. I've enjoyed much of the content that's come from this ongoing angle and this one was no exception. Again I find myself amazed at how good Sabin is once again, how incredible White's been since Omega opened the gap for him, and how impressed I've been with Maclin's growth post-WWE.

Next, we had Taya winning AAA's women's strap from Purrazzo. I was excited for this one, but it didn't pay off much. The "it" in question being my enthusiasm. No, instead this was just outside of "good" territory. The title change was logical considering AAA's current schedule, though I still kind of expected an even longer run.

I wonder if she'll keep the ROH strap for long. I suppose she might have and I'm not caught up to that point yet, though.

Anyway, we had another great one next with in the form of a three-way spotfest with the X-Division Championship on the line. I say often that a key to a strong IMPACT! always includes having a strong X-Division. That's certainly true right now and was on full display for sure. For what it's worth, I watched this show with music playing over the sound of the event itself. While I am sure the reaction didn't response the same way I did, I felt like this worked almost as a turn for Austin due to just how fucking hard he worked on the way to winning the belt.

Interesting to see two three-way matches on the card. Always a fun quirk.

Western style puroresu stuff followed, with JONAH and Ishii facing off. The outcome was admittedly very surprising, though. It reminded me a bit of ROH shows from not that long ago, with home talents falling or being under utilized to put over and prop up New Japan names. Perhaps that's not the right attitude to take here, though. I mean, they've done well not to nerf their crew but this remains an interesting choice regardless.

Very good, borderline great action whatever the reasoning behind the outcome.

Gauntlet style matches are hit or miss, and this one landed somewhere in the middle somehow. Enough overall was good, but it was ultimately a flawed match, too. VBD won to reclaim.

Next, Rosemary and Tasha had a good title match themselves, but it didn't hit that next level and there were a few issues sprinkled throughout. The right one won, at least, with Steelz keeping the strap.

We closed with a truly fantastic battle between Josh Alexander and Moose. I've been really enjoying this angle as it's played out so perhaps your mileage might vary a bit if you don't have the same history coming in, but I still recommend it to any fan in general that has an interest, slight as it may be.

The title change felt well done and worked as a successful PPV payoff.

In all, this was actually a great show. We had four of the seven matches turn out to be worthwhile-to-must-see and the rest was either good or borderline good. As a result, I recommend Rebellion to anyone that's reading this right now.

Props to IMPACT! and their roster for yet another strong 2022 product.