AEW Double or Nothing 2022 Review 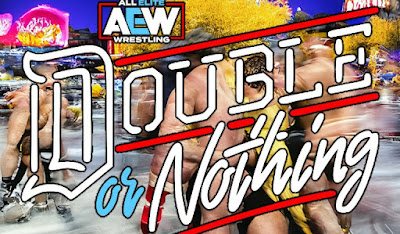 I finally found enough time during this busy week to finish off this show.

We started with MJF vs Wardlow, which was the right call. They got Wardlow over big and it didn't allow for the show to get hijacked. It was also pretty good stuff, though largely through the storytelling on display. When you look at the amount of people on the AEW roster that make more than MJF, some of them questionably so, it's fair to take the dude's side in most of his acts of late.

Next, Jeff Hardy was knocked around. The build was almost nonexistent, an expectation that the names on the marquee were enough, but the payoff overdelivered. Fantastic stuff.

Jade bested Jay to keep the TNT strap. They're getting there, but it was hard not to notice the shades of green dripping from the screen. Stokely and Athena appeared here which was sweet.

Quality six-man action followed as the two of a few dark units that call AEW home went toe to toe. It was a PWG match in a bigger setting and an excellent sprint with some real meat on the bones. I am thankful they finally delivered on the Hart subplot.

The two Owen finals were good, though I sadly think both underdelivered a bit. Still, Adam and Baker winning feels like a fine choice. I wonder if they'll consider using those belts are actual titles to be defended. They could have that and a yearly tournament, too. The winner of the tournament would face whomever currently held the belt at Double or Nothing each year.

The little ceremony was fine.

ATT's match was okay. I haven't cared for basically any of the program and this too did little for me.

Darby and Kyle's contest, that should have been on TV, was great. I appreciated the technicality and pacing work especially.

Thunder and Deeb is another angle I thought had a weak build, largely because they should have moved to backstage, prerecorded packages. The payoff was great, at least. Thunder retained, but Deeb looked awesome.

Rumor right now is that TR is upset with management and/or the booking of her and the belt. Source is admittedly iffy on their stories in terms of validity.

Anarchy was genuinely exhausting and beautifully brilliant. The brutality matched that of a death metal banger and it was sincerely one of the coolest things I've ever watched in my life. The amount of violence on display and the drama that built in waves was nothing short of expertly execute and I consider this one worthy of study and celebration.

While the MJF drama rolls on, TK decided it was a good time to finally accept Andrade's demands. Tranquilo!

Jurassic Express put their belts on the line against two other teams in our semi, which saw Jungle Boy and Luchasaurus walk out victorious. They had a hard act to follow, but I appreciated the way this rose in energy and consider it fantastic entertainment overall.

We close with the kicking off of Summer of Punk III.

I don't feel that they landed this as well as you can tell they wanted to, but I thought in all that this was pretty good, borderline great stuff that happened to be a little rough around the edges. Storytelling and action heavy, I recommend this one not just for being worthwhile but also for the significance which certainly overshadows anything else.

So, Double or Nothing was far too long and was generally bloated but the action largely delivered or overdelivered and it felt like an important show. While a bit rough around the edges, I'd argue that is a complimentary feature here more than a flaw.

I wonder if Tony had to play each time Wild Thing rang out or if he just has blanket access.