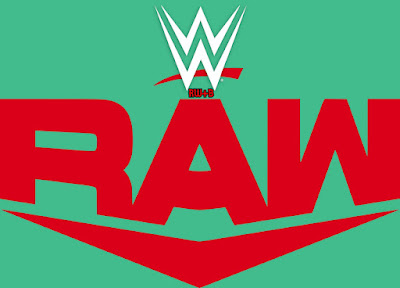 A bud of mine that I like to chat with, even though we do respectfully disagree with each other a lot, had suggested that Raw (on Hulu) had become his favorite weekly wrestling program. This is a dude that watches anything and everything, like myself, and is far from the typical "E drone" that you might be instantly thinking of based off of that comment. So, considering that I like the dude and since my kids enjoyed the Rumble, I figured I'd check out Raw this week and see how it was.

They start with a package showcasing what happened with Brock at the Rumble.

Adam Pearce then, in the ring, has the mic as he promotes the show ahead. He mentions the Chamber but is quickly interrupted by Lashley and MVP. The new WWE Champion is draped in a badass suit. They whine about the Chamber and do cheap heel crap before Brock's jam hits to a decent pop. We're quickly reminded that Brock really shouldn't have a mic in his hands. The biggest thing of note is that Brock made it clear he was facing Roman at Mania but that he wanted his rematch so that it'd be title vs title. The heels ran off, of course. Instead of a legit rematch, Brock is just being added to the EC.

The segment was okay, I suppose. Nothing special but acceptable for what it was.

Rhea and A.S.H. clips are shown, and we get a run down of some of the card, before we head to the first match of the night.

Ripley and Nikki went about eight minutes and was okay. Nikki is playing heel. It was super basic stuff but not terrible at all.

We're off to the most average of starts imaginable.

Apparently Gable cannot spell and then they aired clips from the Orton/Chad match from last week.

Chad and the dude that said the only thing keeping him from beating his kids was weed had a scooter race next. We cut away once it started to see a repeat of the Bliss segment from last week. I wonder if she has any heat from that tweet? Vince and crew are a bunch of soft children so she might.

A new segment with Bliss ran after the break. Her doctor showed her a replica doll and she smiled. That's about it.

The race continues and we're apparently half done with it.

Owens is in the ring, mic in hand. It's the KO Show. Apparently Mania is a two night event again this year. Of course it is. More money. Remember, Khan recently said he'd add an hour to SmackDown if he could. Quantity over quality, folks.

Anyway, Owens invites out Seth and bromance with a stiff, foreshadowing edge follows. The segment was fine.

Eventually we got to match number two, which was the first great thing on the episode. Theory is a dude I've been hard on in the past. By that, I mean I've always felt he was far from the best dude on any roster he was a part of. EVOLVE, CRASH, NXT, Raw but I've also been clear that he is talented as a worker. Gabe, Triple H, and Vince clearly think, and/or thought, a lot of him, too. I also don't care for him as a person in the slightest, to be clear. Here he stepped up nicely, regardless. This could have easily been a forgettable clash, but Kevin, who is amazing, and Austin had a great one here on Raw and honestly it was worth checking out.

Sadly, this was followed by the finish to the scooter race. Sigh.

Otis and Riddle followed and it was announced prior that it was an Elimination Chamber qualifier. They ran the David vs Goliath angle here with the big man beating down on the former UFC fighter. I don't care much for either but this was good overall. It in no way made up for the scooter race, though.

WWE is funny in that it's both "family friendly" while also being full of weird shit that is so blatantly not family friendly and it's a weird ass paradox. Just a random thought drop.

Anyway, so far the Chamber will have Lashley, Seth, Austin, Brock, and Riddle.

Alpha Academy got an interview spot next because apparently we hadn't already seen enough of them tonight. Gable, like Kurt, gets put in a lot of stupid ass angles. I still love his work in the ring, just like Kurt, at least. I just think we've had plenty of them on TV already for this installment.

The main event saw AJ Styles and Mysterio in singles action in the last qualifier, which was for sure the second best thing of the episode. It wasn't their best work, but for a TV throwaway this worked well and in general I thought this was pretty good. The right dude won, too.

The Chamber match should be an easy **** match. Hopefully they don't botch it. Is Shane going to be "helping" again?

Ronda came out to close this one. She was joined by Becky shortly after. The entire thing was a bit rough. Lita came out after to give a bit of a spark, which at least helped the episode not end on such an off fucking note. I don't hate Lynch versus Lita and EC is coming off as promising. I just wish I could trust this company to nail a landing enough for me to trust or care about the product.

I tried this a few months ago, too. Honestly, it's just not for me. Lets start by pointing out that the biggest issue most people have had with WWE for years is that a three hour Raw is a chore to watch. WWE isn't good enough of a product to warrant that dive each week. This fixes that by cutting off a giant chunk. Already, off of the bat, we have a better situation. It's for that reason that I urge anyone that does want to watch Raw regularly to do so with this version. I just personally cannot justify continuing to do this. Even the kids lost interest during a lot of it. I'll watch full shows if the kids are interested enough, but otherwise will stick to just select content. Honestly, the matches here were all fine but it's all of the other stuff that I just don't care about at all and that shit takes up so much time. Here, the KO/Theory match and the Rey/AJ match was worth checking out. Skip the rest.