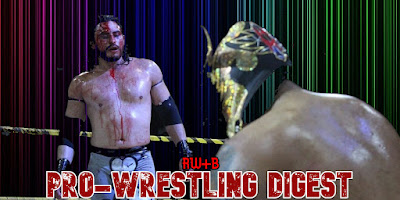 We're back again, though I warn in advance that this will be far smaller an edition than most of the previous installments. I have a move ahead of me this weekend.

Yeah, this was awesome. It's stuff like this that keep the love/hate relationship I have with IWRG leaning more towards a direction that keeps me coming back. Halcon Magico was awesome, I appreciated the pace, the tone, and the level of violence. It's a shame not many outside of a niche section of fans will ever see this, but I am also not sure if everyone else would enjoy this nearly as much as I did.

I have been meaning to watch this one for a long time. The NWA isn't something I have truly loved since it returned, but I have an appreciation of sorts regardless. I especially love Leyla getting the shot here at this gig. They really leaned in and made this work. I'd argue that it's one of the best things the NWA has been involved with since the 80's. Hirsch gave Kamille the best match of her career.

Note, at the recent AEW press call, Tony Khan got a bit touchy about a question and essentially said he was annoyed that he had helped the NWA but never got enough credit for it.

This was a pretty good TV cage match. Big E is a fun champ and I am glad to see him getting this run. Kevin is having an entertaining swan song.

During the commercial break that immediately followed, Lashley came and made a statement. HERE is the video for those that care.

Miz and Edge's program, which remains an off brand MJF/Punk, CONTINUED. They'll work Day One.

The only other thing from Raw that caught my eye was this one. Liv, to her credit, seems to have gotten a bit better. This still had some roughness around the edges, but was fine for what I presume is a building block match. To be fair, this is WWE so it's just as likely that they're move in a different direction next week and forget about the story.

I rarely care about the quality of commentary nor the crowd reactions when I watch wrestling, unless it is one of two things. If it's terrible, it'll be too much to ignore. If it's full of pure energy? Respect. This one had no crowd but some pretty solid commentary. I think they have arguably the best team in that field. They'll be back in a few months as a super indie, by the way.

This match was awesome and the storytelling top shelf. Tight, professional work and an awesome display that some on the roster still show up and show off regardless of the situation.

In short, this fucked.

Quickshot Teddy Long stuff. Too short to be much, but okay filler on the way to the end of an era.

I started WarGames but crashed. Crazy week. That review will go up as soon as I can finish the show.

This reign lasted 182 days. Takashi beat Fujita for the strap, beat Sakuraba in his first defense, and beat Tanaka in a contest that saw Sugiura retain while also winning the ZERO1 top belt. The belt is clearly becoming a trophy for grandpas but luckily it's for old dudes that can still fucking go. Great stuff here and a solid conclusion to a run.

Naka's first defense of reign two was fantastic and I'm sure he has an awesome run ahead of him. The pace worked decently and the action was tight. Simple, but highly enjoyable.

I'm going to have to stop here. I'll be back next week. Thanks for reading.