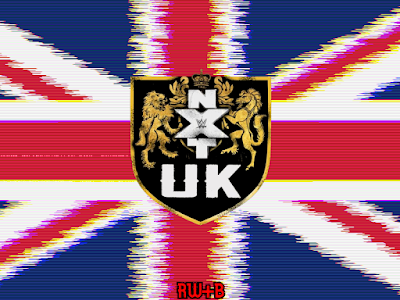 The main had made my pull list, so I figured I'd just check the whole episode out considering I haven't watched much NXT UK in a while. If I'm going to have an opinion on something, it's good to make sure it's an up-to-date one or whatever.

I dig the tone right off the bat.

Up first, we had a good women's match. They worked hard, we got an Satomura appearance, and I appreciated the drama. This built up nicely and was a strong way to kick off the episode. Best of all, both came off well, which I always find to be important.

Jinny and Seiko shared a moment after.

Backstage, Bae had a stiff segment and then we saw a fun A-Kid package.

The midcard saw Andrews basically get destroyed. It was good for what it was and kept the show moving along nicely.

The main event saw Noam Dar and Wolfgang in tournament action. Both are dudes that are good and can be very good against the right opponent. They apparently are the right opponents for each other. The match style helped. Honestly, it was pretty good overall. Borderline great, really.

I might watch more to get an idea of what's up with this show. Are they not pulling the same shit on NXT UK that they are with NXT? Is it being left alone? If so, this might be my A-show for WWE. 205 was for a brief time there, too. Sometimes, the things WWE cares the least about are the best. Plus, their champs are great! This really felt like the golden era of NXT, so I'm interested for sure. It reminded me a lot of when I'd watch NGW:UK TV, semi-campy segments included.

Check it out. Why the fuck not.