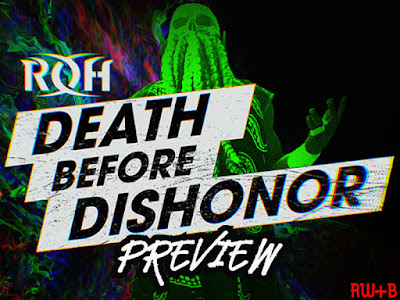 Ring of Honor returns to 2300 Arena with their latest big event this weekend on the 12th. Don't feel too bad if you didn't know it was happening. ROH has turned away a lot of fans and, despite the stacked roster and the product being pretty good right now, they're still pretty cold outside of the diehard circles. I know not many disenfranchised or casual fans are likely to watch, but I am hopeful this preview helps at least one person get interested in the product again. Since their return late last year they've been far better than they've been in years, feel like they have more of a direction that they have in years, and they're also about to have a pretty big moment soon.

The Hour One pre-show match for this show is a 15-man Honor Rumble. The only names I've seen announced so far are Silas Young, Milonas, Beer City Bruiser, Rey Horus, PJ Black, Sledge, Draper, Brian Johnson, Danhausen, and Joe Keys. Expect a surprise or two. If I had to bet, based solely on the announced names, I'd pick Draper or Horus for the win here. I'm not big on rumble matches so personally I'm not likely to watch this one either way.

Jake Atlas, now free from the chains of a sinking ship, is facing Taylor Rust, also released during the August NXT wave of "budget cuts", in a match that should be fun. I'm expecting it to go about ten minutes and to end with Atlas raising his arm high. Sleeper shit here for sure.

The Briscoes will be taking on OGK (Taven, Bennett). I'm hoping they play this straight without any added drama. If they do, this one should be a great tag team match. I'm leaning toward Taven getting the victory for OGK here, but never count out Mark and Jay.

Isom has been getting a slight boost this year and is clearly being picked for something bigger down the line. Castle is a former world champion. While the latter is still not the same as he was pre-injury, a victory over him is a big deal for a dude on the rise. Their match together should be pretty good and I'm expecting the rise to continue.

The six-man match will be worth keeping an eye on. From a quality standpoint for sure, but also because one of the participants was just signed to AEW yesterday during the Elevation tapings. I've heard that Ring of Honor is joining the Forbidden Door ranks soon, officially, and this show should be a big test to see how accurate that is. The pure style trio isn't likely to get the W here either way, with VLNCE UNLTD seeming destined to walk out on top. We'll see.

There are four championship matches on the card, too.

Shane Taylor Promotions have been awesome as champs but this weekend they run into LFI. Rush is out with an injury and there are some contracts coming up soon that have question marks popping up and several rumors attached. The fact is, I can see this going either way and it'll be pretty telling. It should be a great contest, too.

Gresham and Woods are facing off with the Pure strap on the line and it has potential to be MOTN. This one has me torn a bit, too. Jon has been awesome as champ and I'd love to see his run continue. I expect a title change, though. Woods would be a fun champ, even if just a transitional one. It'll be fine either way and the quality of this one will more than make up for any potential disappointment regardless.

The Women's Championship, with the WOH belt being murdered in an alley somewhere, will see an inaugural holder crowned this weekend when Rok-C and Alize go one on one. I've seen a lot of potential in these two and it says a lot that they were chosen as the participants. I hope they surprise some folks and I honestly feel pretty unsure which direction they'll go here. Either will make a good first champion but Alize seems like the safer choice.

The main event will see the Ring of Honor World Champion, Bandido, defending against three dudes with elimination rules in place. Him and Demonic Flamita will provide for some bad ass spots and EC3 and King for some solid base work. Brody will likely get in on some of the dive fun. EC3 might even if he's in the mood. I'm expecting Flamita out first, King next, and then EC3 to fall after nearly beating Bandido. I could be very wrong here. Much of the card could really go in many different directions and that's part of the charm of Ring of Honor right now. I do not expect a title change.

If you've fallen off of the product, consider checking out some recent content and then maybe pop in this weekend.