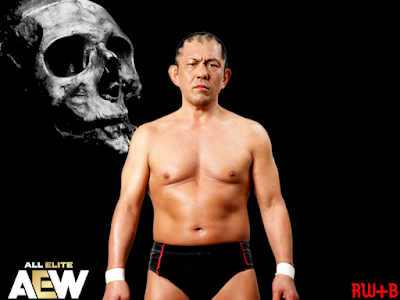 I was hoping to post a live review, but I had a terrible headache and then passed out during the last half of the show thanks to my shitty sleep habits.

Excalibur is MIA this week. Congrats to him for getting married. The show suffered on commentary without him.

Black kicked us off. Dustin can be an awesome worker when he's in the right situation and this one had some potential for sure. My biggest issue is that they took up perhaps a bit too much time here, even though it was a good match, because showing Dustin off as being capable of slightly putting up a fight ended up taking time away from other things later. Still, a good way to kick things off as Black continues to roll through the Nightmare Family. Cody returns soon from filming his show and gets a rematch on the 22nd. I hope they do the right thing in that match.

Dustin spat up blood after.

The Lucha Bros got some package work. I really loved how that match featured the return of the tack shoes. Such an awesome match.

Miro let us know that his balls were also sore after the match with Kingston.

Cult of Personality hit right as the alarm telling me to run down to the laundry room rang out. I waited a bit but while knowing the risk of this one crazy chick messing with my shit was increasing by the minute. Brave shit, I know.

Punk told us that he's back on a bike and again continues to seem to be happier than ever. He put over Suzuki big as well as Mox and got the fans hyped for the main event. He put over Lady Pillman. He put over Ruby, Cole, and Bryan for their debuts at All Out. He referenced his wifey and then teased what's next. Who's next. Taz asked for a mic and interrupted. They shared some drama. It came off a bit forced, to be honest, and shook up the momentum of the moment. Hobbs and Hook came out and Punk called out the entire unit. It looks like he's going to be dealing with them for now but the segment could've been handled a lot better. The matches should be okay and I know he wanted to get a shot at Hobbs, but it still surprised me a bit.

My fat ass ran down to the laundry room after only to find that the machine had added more time to the load, by the way. Bullshit.

Hobbs versus Dante is mentioned next. The outcome could have seemingly gone either way prior to that last section. That's changed.

PnP called themselves the best.

Ruby spoke with Tony just to be interrupted by Baker and crew. An awesome moment. These two are great on the mic and great in the ring. Good shit.

Hobbs was the window and Dante the bird throughout their contest. PIP match. Some good shit sprinkled throughout but a few minor flaws kept it from being close to recommendable. That is pretty sad considering this could have been awesome. Good, but below expectations.

Dan Lambert was in his box, here again to insult the fans, Punk, etc. He continues to be everyone's alcoholic uncle. Tony, bro, seriously, stop with this shit. This is WWE level shit. Cheap go-away heat shit.

The HFO and Best Friends feud continued via a fun package. An apuesta tease!

MJF got some good cheap heat. Varsity Blond music hits. Pillman is out with a Bengals jersey and drama follows. Cheap stuff overall, but entertaining enough. MJF and Wardlow even had a bit of a thing here. The way AEW uses hometown people has been decent. MJF sent a chick into labor with this one for fucks sake.

Hayter versus Ruby time followed. PIP match but a good one for sure. I appreciated them actually being pretty even here as Hayter is still being built up nicely, too. After, when the heels attacked, Riho tried and failed to make a safe. Kris and a chair did the trick, though. Trios match? Ruby looked a bit hurt during this one.

A Cage and Starks package ran.

Dark Order drama aired ahead of the next one.

Taz and Tony tired to make the Punk segment work better but did the opposite.

The Dark Order/Pinnacle match could have been awesome but the show was already running out of time. Instead, we had more minor story development as the former unit continues to have issues.

After, Dark Order all got physical. TayJay watched on.

Clips from the Casino Battle Royale at All Out were shown spliced with a few short words from some of the participants.

Tully backstage asked for Spears versus Darby and called out Sting.

Sammy Guevara used some poster cards to chat about the Summer.

The Varsity Blonds were shown backstage licking their wounds. Pillman versus MJF at Grand Slam is announced as was Caster vs Brian for Rampage.

The Elite/Bryan Danielson segment was good and continues the set up of Omega versus Dragon so it's a win in my book. It also seemingly set up a clusterfuck tag which sounds fun, too.

Mox/Suzuki remained. It rocked, as expected, and they made the best of the ten minutes they had. It went PIP too, by the way. I wish they had had more time but I also appreciated seeing what the two would do in such a situation. With the bell, Mox now is 2-0 on Minoru and I really hope we get a third match soon between the two.

Dynamite this week worked well as a follow up episode for All Out. They continued some angles, added some more, and we had some good wrestling. There were numerous little nitpicks I had throughout that I feel dragged the episode down a bit and it could've easily been better, but it was still a pretty damn fun 2-hour installment. They actually beat Raw in the key demo with this one, too. I'd love a bit more focus from AEW, which I feel has wavered just a touch lately, All Out being a huge exception, but I say that while also acknowledging that they're as close to perfect as any promotion could be right now.