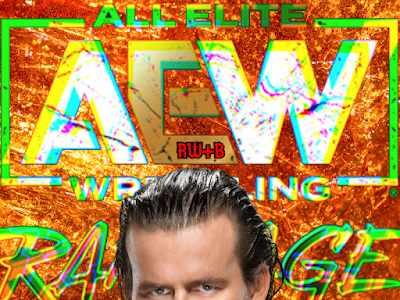 I get why they taped Rampage and Elevation on Wednesday, but I also get why the audience seemed a bit worn here. Still, this felt like yet another strong edition of Rampage. Note that I've mentioned before that I had heard that TNT wanted to consider making the show two hours. This felt like a test. I'd prefer it to be one, but fuck me. It'd still be a good show at two and they have the roster to do it. They might need to reshuffle a few things backstage to make it work.

Punk marked off another from his wish list in the opener, this time besting Hobbs. I know Powerhouse has a lot of friends backstage that see a lot in him, but I'm admittedly not sold on the idea that he's a future star. The contest was okay for a throwaway. The best thing out of the rivalry was Punk's promo on Dynamite. The rest is okay but nothing special. Also, I admittedly prefer Punk in shorts.

SuperKliq versus Christian, Jungle, and Vibora was a spectacle, just like it should have been. The right team won, the action was tight and fast, and the entire thing was borderline great. I'm glad six-man belts are coming soon.

Next, Men of the Year and Inner Circle had an average match. I know Lambert and ATT are well liked by the crew, but I also really don't care for this. Dan comes out, shouts stuff that sounds like everyone's drunk uncle at a family gathering on a mic, and the general consensus I've seen, anecdotal or not, suggests the heat is go-away in nature. I feel the same. The match was pretty basic, overbooked, and ended in a shit finish. I don't think either Page nor Sky are benefiting from this. I also found the post-match angle to be pretty poorly done, with Jericho and Hager stalling to actually attack Lambert while ATT SLOOOOOWLY walked to the ring to attack. The rest of Inner Circle could have ran out twice to help during that window.

The clusterfuck tag was great, balls-to-the-wall action full of excitement. It was also a showcase for how stacked this company's tag division is. Add in the Nets jerseys, and you have a nice treat for a dude like me that loves shit like this. MOTN.

Matt Hardy, pissed after his unit failed to pick up the win, promotes an apuesta for Orange versus Evans.

Miro murdered Sammy and Fuego next while Starks creamed himself.

Andrade wants another match with PAC, with no bullshit being promised. Expect some bullshit.

Next, Anna Jay and Ford had an overbooked match with a shit finish. I really like Jay and Ford can be good in the right situations, but this wasn't my cup of tea in the slightest. AEW is a variety show and that happens. The feud will continue. After, more chaos with the dudes all getting in on the drama, too.

The Lights Out match was a good way to close the show. Sure, not everything worked out the way it should have, but it was still an enjoyable chapter in this ongoing angle. Homicide running in was a cool moment, too. So while I agree this didn't land as clearly intended, I still enjoyed it and found the contest to be fairly good.

Rampage this week didn't hit as hard as some of the other episodes have, but this was a solid two-hours of pro wrestling entertainment regardless and worth your consideration. If nothing else, consider the clusterfuck and the SuperKliq matches.