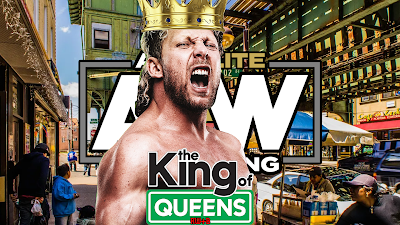 This is the next biggest night in AEW history. They've had a few of these lately, haven't they? When you're on a streak like this, well you've got to keep it going. TNT promoted Rampage on the bottom graphic during the lead-in film, for those wanting something funny.

The show kicked off with Bryan and Omega! That's an interesting choice, for sure. I'd bet they wanted to make sure there was no issues with needing to rush anything while also kicking off things on a high note. The ramp has a built in screen, which is pretty fucking cool. The aura once that bell rang was fucking magic. Sportsnation kicked off their episode today with a clip of it. I haven't seen a wrestling crowd this amped at this size in decades. Also, remember that wrestlers have been going out of their way to get a chance to face Omega. He's number one on the list of many worker's bucket-lists and it's for a damn good reason. Bryan, a dude I'd argue could easily be called the best United States born wrestler of all time, is one of those workers. That says a lot. Quickly on you could tell they were aiming for more of a Japanese style performance and I was all in on that. This was Kenny in 2018 form. It was apparent quickly too that this was THE American Dragon reborn, the one we haven't truly seen in a very long time. He was out to prove that he was capable of still being that dude and he did exactly that. Outside of that, I'd just say that props are required for not just the top shelf work on display throughout, with amazing spot after amazing spot, but also the general psychology and storytelling, too. Even in a vacuum, this match simply rocked and was a true match of the year contender that ebbed and flowed beautifully. If I had any complaints at all it'd be that a lot of fans are still worried about Bryan's health and it might make some people uneasy to watch portions. Oh, and that they had to go PIP for a stretch.

Listen, the fact is that I could rant and ramble a lot more about this one, but I'll stop here and just say that it's something all fans should watch. A five star classic and sincerely one of my favorite matches ever.

I've already rewatched it and will again soon.

After the bell, The Elite ran out to break things up. I expected a draw and I got one and have no complaints in the slightest that it's what happened. I did think we would get that restart drama tease that would then be broken up but this worked, too. Christian and Jurassic Express ran off the heels while a doctor checked on Bryan. Admittedly, Dragon actually might have been hurt during this. Hopefully I am wrong and he was just selling that well, but there were multiple signs that I, a trained ref, have been warned of. I'm not a doctor though so fuck me.

By the way, I did a bit of digging recently and the best I can tell is that Christian was picked to go over Omega because they wanted an AEW guy to do so and to do it far enough ahead of Page's return, and presumed victory, as possible. IMPACT apparently wants Alexander to get the gold at Bound for Glory, which runs before Full Gear.

On a related note, new championships are coming to AEW, by the way. I wrote most of this review last night and it looks like others have broken this already today. I've mentioned this a few times here in the past, of course, but I'm a far lesser name. Six-man and something for the women's division. I've heard the latter is either tag based of meant to be secondary like the TNT strap. Reports today say it'll be called the TBS Championship.

An XPW ad ran after which was funny. The names announced are fine and seeing Cage listed was interesting. XPW was pretty fucking bad, though. I want to give them props for getting an ad to run here, either way.

After the break, CM Punk came out because AEW likes to spoil us assholes and he cut a fucking great promo. I have been clear in saying his feud so far with Team Taz has been a bit off, but Punk has a list of names he wants to work with and Hobbs just happens to be on it. He sold the match with Powerhouse pretty well here though is what I'm saying and that's all it takes sometimes.

Stephen Amell was shown at ringside when Punk embraced him at the end of the segment. I still need to check out the new show, but I'm a huge Arrowverse fan. I'm way behind on the shows, but the fact that I've already watched hundreds of episodes from that tv universe and want to watch hundreds more should say a lot. He's also one of the few celebrities that impressed me when they tried out wrestling.

MJF versus Pillman Jr is up next. Logical card placement. So, on a quick side note I knew that AEW was doing something with Owen Hart for a while. I was aware of plans for toys and other merch, but not of the tournament. That seems to be set for their Kansas City show in November and I think them elevating Brian a bit right now might have something to do with that. Consider it a test? It worked out well that they ran his home town before the event and the natural progression works nicely even with MJF getting the rebound victory over him in this one. This might be one of the weakest contests of the week, but it was completely acceptable regardless and that's all it needed to be in my opinion. Part of it was cut off, with PIP only covering half of the commercial break and then full screen ads for the rest.

If they really want to go all in on Pillman, just have the dude snap and try something similar to his dad but with a modern twist. It's worth a try, at least.

Jericho and Hager, backstage, promoted their match with Men of the Year. Hager wants to spank them. Jericho wants to jerk off some big meat.

Lights out, Amenra plays, Black arrives. Cody got a pretty dramatic entrance too, of course. This one was the one match of the week that I was most torn on. I sincerely had no idea what the plan would be, but feared Rhodes going over which I felt was the wrong move was the planned finish. Brandi was back, by the way. The entire feud with Black and the Nightmare Family has been a bit off for me. Some very good moments, but several things have felt less than smooth along the way. Anyway, Brandi was involved in an attempted distraction spot early on, but it wasn't super overdone at least. Arn slipped later in a weird spot. Cody was Captain America. This one also got PIP treatment in the same way that the MJF match did. The finish saw Cody shove the ref, get misted, and then a rollup victory for Black to give Malakai a victory but keep Cody protected. That's a lot of things I didn't care much for here. The finish was okay I suppose and clearly they were setting some seeds into the soil. I'll call this one good, likely rating it below what others will, but add in a few asterisks as a warning or whatever.

Sting and Darby took on FTR in the next one. The latter wore nWo themed trunks. One day I'd love to see Sting wear his surfer makeup again as a one-off. Whatever, the dude is in his 60's but worked here better than many dudes a third of his age. Add in FTR putting in hard work, once again, and Darby trying to cripple himself and you have a spectacle. Yeah, great shit and pure entertainment.

The women's match main evented, which is pretty cool. It was a very good match, too. I know the finish hit the quality perhaps a touch, but it also worked to try to protect Ruby so I'm cool with the choice here. Baker had to win one way or another. Hayter is a shoo-in for inaugural TBS Champion.

Tonight surely marks three weeks in a row that AEW will have defeated Raw in the key demo. It started with an amazing spectacle, everything was good-to-great, and it all flowed perfectly. Dynamite: Grand Slam needed to be a special edition and that's exactly what it was.

Make time for this one, for sure.

Matches: 1.Dead or Alive Cage Match: YAMATO, KAI vs SB KENTo, Dragon Kid ***1/2 Thoughts: I used to fucking love watching this show, but then a certain site died and no one seemed to know how to tell me how I could keep watching. As a result, I then started just watching select matches again. That sucked because I used to consider this company my favorite. While I don't have the same attachment as I used to, I still really do enjoy the roster, the style, and would absolutely love to watch DG more regularly. I finally found the fucking thing, though. It appears that GAORA SPORTS' YouTube channel uploads episodes on Saturdays and seems to have been doing so since at least April. Better late than never. I just hope they don't stop airing it, causing me to have to once again search for the new home. Anyway, I'm still catching up on some missed content from the first six months of the year but I really want to do this the right way because I'm so fucking excited just to

So, this is where I admit to doing something very stupid. I had went to make this post, meant to be the second installment of this new ongoing digest series, and I accidentally deleted the original. I'll blame it on low blood sugar and a brain fart. Shit happens. AAA Los Jinetes del Aire bested Poder del Norte and then former CMLL unit, NGD, versus Psycho Circus' Monster and Murder and Pagano went to a no contest. AIW Matt Cardona is holding some new gold. He defeated Josh Bishop to take home the Absolute and Intense straps. BJW Okami defeated Hashimoto and Sato to retain the BJW Tag belts, Nomura bested champion Nakanoue to win the Strong World Heavyweight Championship, and Miyamoto successfully defended the Death Heavyweight belt against Ito in a scaffold death match. CMLL Sky Team reunited with Volador and Mistico teaming with Atlantis Jr where the bested Hechicero, Euforia, and Dragon Rojo Jr. DDT The Who's Gonna Top 2021 gig closed with DAMNATION's Daisuke, Paulie,