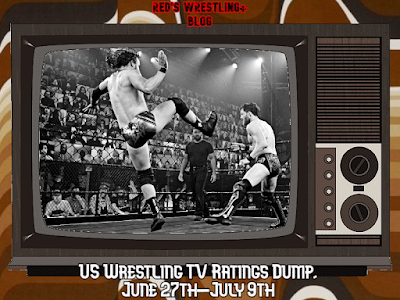 There was some fun to have here, for sure. Here's some extra content I wanted to chat about, too:

Woods flash-pinned Lashley, which was interesting. He then told off MVP and made it clear shit was going to get real. It could make for some good shit. I know Cena is due back soon. Maybe he'll be involved? Lesnar is set to return soon, too.

Kross and Gargano had some heat going that was fun to watch on NXT. Joe was set up as the special ref for that one on the GAB special edition. The new Diamond Mine faction for the brand is interesting. I'm very excited to see what they do with them.

I know AEW ran a match with Guerrero actually working and I refused to watch it. I don't hate myself that badly. I love Kaz as the Elite Hunter. Kenny is channeling a legend. He also had a fun setup with Evil Uno to get us ready for a match against Page. That one is going to be amazing. Jungle Boy is the first to 50. That's cool. At Road Rager, they teased something big and then revealed Black had joined. It was a well done moment for sure. I loved that he was selling his eye injury still. I wish they had done a lights out moment one more time though. WWE fucked up BIG when they let him go. Baker was put through a table one week and the next week she buried WWE with a badass promo. One of my favorites of the year. Amazing shit. MJF is putting Jericho through a trial after a cheap win over Sammy as he continues to build himself into a big fucking star. Oh, and Starks is BACK on television which is great for everyone!

Bey finally picked a side in the X-Division line drama, joining the tecnico side. The IMPACT tag division is being decimated by VBD. Moose turned on Sabin during a six-man, which was interesting I suppose. Sami Callihan and Omega signed a contract to set up their title match and Sami stood tall over the champ at the end of the segment. That will be worth seeing. Oh, and Anderson is perhaps getting a push? He is getting an IWGP US Championship match on Dynamite and won a four way on IMPACT.

On SmackDown, Edge is back and going after Roman and Jimmy's latest incident where he decided to endanger everyone seems to have no blowback coming. I'm excited to see the Edge/Roman story, to be honest. The story of Roman and his family has been entertaining all year and Edge is great at story work usually. Bayley is out with an injury, sadly. Figured it was worth mentioning. She'll be back with a spark I'm sure!

Again, there was a lot of great stuff during this period that was worth seeing. Take a look at anything I've rated or mentioned that sparks your interest.