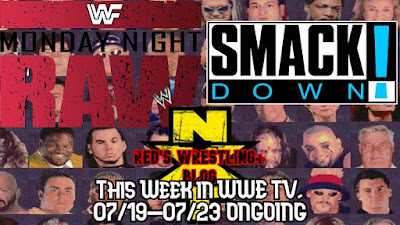 I figured I'd try something new this time around. I'll include "ONGOING" in the titles as they are active and remove it once complete and will include anything WWE puts on tv that specific review period that catches my eye, plus I'll take a look at select angles that interest me and comment on those, too.

RAW featured Cena returning to complain about a dude that isn't on Raw. He claimed to love chaos. It was standard fun Cena stuff. Not good, not bad. He'll be on Fox, too. No way he isn't because Fox won't be happy seeing all the love USA got instead, otherwise. What chants are annoying. A Summerslam match between Cena and Roman should be fun, at least. It won't be a MOTYC and that's okay. Roman will get a nice rub that I hope WWE doesn't fuck up. It's a coin flip.

Keith Lee returned. He lost to Lashley in about two minutes because that's how you bring back a dude. Then Goldberg came out to challenge the dude. So, Cena on SmackDown. Goldberg on Raw.

NXT was supposed to help keep AEW's numbers down but didn't do as well as hoped, the entire situation leaving Vince a bit triggered. The brief bit of time that the brand was seeing some inkling of respect was destroyed slowly and especially here. Kross debuting, without Scarlett and while still being booked as a monster champ on Tuesdays, and then falling in two minutes to Jeff Hardy is a message. Anyone that has been helping build him up as a force should be pissed right now, by the way.

Flair and Rhea was okay for what it was and ended in cheap fashion. Her NXT reigns were dropped from her title count. Message received, right? After, Nikki A.S.H. cashed in and beat Flair for the belt. Fun stuff for the kids if nothing else.

On NXT, Joe called out Kross. Regal came out, annoyed. The segment was better than it should have been. Falling to 2021 Jeff on Raw and then the next say being still sold as a beast. I should care about the match now why? Right? Joe and Dunne shared a moment later, too.

Apparently at the tapings this week, by the way, the fans kept chanting "Jeff Hardy" at Kross and they lied to folks to keep them there so that they could re-record the damn angle. Pathetic narrative control bullshit. It's really surprising how many people stan for these dipshits.

Kushida and Fish beat Diamond Mine. Why have them fall this quickly? As a match it was actually borderline recommendation levels and a nice, crisp tag match.

Basically the same can be said for Kyle and Austin's singles match, which was the next chapter in Kyle's 2021 which has been rather fun to watch.

Hit Row crashed the Legado crew's segment. It could make for a killer match. I didn't care about the angle.

The women's championship contest was super average stuff and the injury and tone deaf finish to boot didn't help things. Shit happens. Raquel can be fun but really does need the right opponent.

The NXT UK side of things had a tag title match this week. Also, note that WALTER is injured.

The Pretty Deadly vs SubCulture bout was great and a noteworthy televised title match for sure. Both teams are pretty dang good so it wasn't too surprising, but somehow still surprising since this brand is rather lifeless more often than not.

SmackDown started with John Cena, who finally ended up on the show of the dude he's calling out. Also, Fox would've been pissed if Raw had him and Goldberg and they had nothing. It was...okay...and ended with Paul Heyman singing Cena's theme which was...interesting...

Finn Balor against Sami Zayn was the first SD match I pulled. Honestly, it was fairly good stuff and a nice competitive bout. The right dude won and it flowed well enough. No complaints, really.

Edge called out Seth. It was decent, Edge was pretty dang good, and the match could be interesting.

I'll try to make time for Money in the Bank tomorrow if possible (Monday). We'll see, though I'm pretty drained from a trip to Niagara Falls and other happenings this weekend.

A SmackDown Women's Championship match from the Rolling Loud Festival aired this week. Carmella isn't capable of MOTYC's but is an acceptable stepping stone challenger. Bianca has admittedly not impressed me very much since her awesome Mania performance but still is rather decent, too. Their match was solid for what it was but nothing you need to rush and see. I'm surprised they didn't just tape the entire episode from there but I don't know enough about the situation, nor care to, to know if that was even possible or desired or whatever. Whatever.

Dominik and Jimmy's one on one is the last pull of the week for me from the WWE. It wasn't good. Average is the nicest description I can give it and even that is perhaps too generous. If not for being Rey's son, DM would be nowhere near a SmackDown ring and honestly shouldn't be, either.

Shotzi and Nox nailed Corbin in the nads with their tank. That's something that happened. You just know Vince was laughing his ass off backstage like a little fucking kid. Super cringe stuff basically like anything involving The Potato.

Oh, and Roman turned down Cena's challenge and instead is set to face Finn, which apparently triggered some oversensitive dipshits on Twitter and Reddit. WWE shaped their fans to embrace bigotry for decades and I'm not surprised to see the homophobic shit I saw a few days ago after the segment. Cesspool shit, people.

I really liked the NXT UK Tag Team Championship defense and decently enjoyed a few others, but this was a down week for sure. You'd be forgiven for skipping it all, really.

Next week is hopefully going to be better. We'll see.