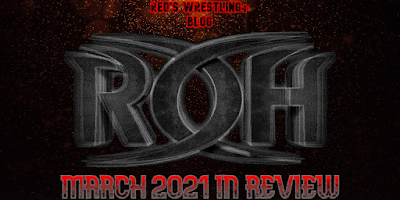 2.La Faccion Ingobernable vs The Foundation ****

I'm caught up on a few promotions and now it's time for Ring of Honor.

The four-way contenders match was great shit and honestly proved nicely that their heavyweight division is far better than most give credit. EC3 and Jay's feud was fun stuff here especially. I'd note that the interference stuff with Taven at the end was a bit much, though.

LFI and The Foundation had a fantastic multiman that showcased how awesome this roster is at gelling styles. Unit warfare stuff is always fun and this was even better than I had expected.

The 19th Anniversary gig was a nice ride. Of course, the change to the TV Title match was a big disappointment, though.

Jay Briscoe and EC3's contest was very good and an oldschool feeling experience. I give EC3 credit because he's been working his ass off post-WWE. Jay rocked as always, too.

MexaBlood exploded in the next one; an awesome as fuck three-way lucha libre showcase. It was a true display of the genre as it stands currently and a must-see for sure.

Forest Sowa on YouTube is fucking amazing. At least, his coverage of this next match was. Dak was far, far, far better here than expected and Gresham was the true amazing genius that he always is. The Pure division is amazing and the style has rarely been done this good. I urge this for all tech fans.

Rush and Lethal had a great title bout that felt like a big fight feel. They worked hard and pulled off a noteworthy defense in the book that is Rush's reign as ROH World Heavyweight Champion.

The last match was actually reviewed HERE, and aired on the first episode of Slam Masters, months ago.

In all, I found these matches to all be worth checking out and a nice display of why this brand is truly one of the best in the world right now. Check them all out if you fucked up and haven't already done so.