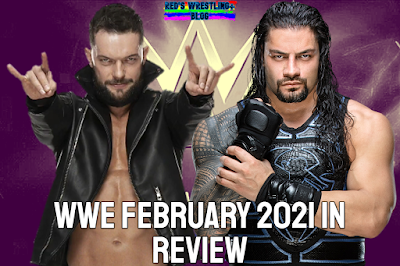 11.Elimination Chamber: Bryan vs Cesaro vs Jey vs Corbin vs KO vs Zayn ****

13.WWE Title, Elimination Chamber: McIntyre(c) vs Styles vs Hardy vs Kofi vs Orton vs Sheamus ***3/4

The first two matches were from the Dusty tournament, and both were very good tag team contests. I especially enjoy the pairing of Ciampa and Thatcher and it was nice getting to see LHP do...something.

Over on SD, Crews, Sami, and Big E worked an Intercontinental Championship match that was worth seeing. When dudes like these are allowed to actually work, they fucking work. Great stuff overall and more proof that the IC Title is still where it's at!

Back to NXT for more Dusty Classic action, and we have new toys to the brand, MSK, against Legado del Fantasma in a semi-finals match. Very good match and I'm glad MSK are being booked so strongly.

Back to NXT's weekly show, following the events from the week before where Finn was attacked and then aided by UE, and we have a follow up match to compliment their the NXT Championship match from TakeOver. Sadly, it was overbooked and the match itself wasn't worth seeing from an in-ring quality stance. It was worth watching in highlight form though, because this is the match that officially set up the end of UE.

Over to Elimination Chamber, and we start with SmackDown's offering.

Starting with Bryan and Cesaro was a good move, but really there were a lot of great things done here, in general. The sole weak link was taken out quickly enough and there was a nice load of excitement and drama that built well enough alongside the action. Fantastic stuff that surpassed expectations.

After Bryan's big moment, Roman appeared, and the Universal Championship match started. It ran about 2 minutes long, featured a tease that Bryan might actually overcome it all, just for Roman to squash him down. The logic here is a mixed bag. Edge took the champ out after it all. Have I mentioned that Bryan is going to AEW? Charlotte too if you care.

The Raw EC match was great, even if a tad below the quality of SmackDown's offering. I appreciated the hard hits and the layout generally worked for me. Jeff looked decent, Orton and Kofi good, AJ reminded me a bit of Edge in his part here, and Sheamus and Drew rocked. The attack after by Lashley was decent and Miz running out ended the scene on a shocker, as Miz beat the damaged champ to take the WWE title.

Closing the set, we have Kross beating Escobar in a no disqualification affair which meant it was actually a handicap match. As a result, Kross was booked like Superman and Legado del Fantasma were geeked out. A circus style spectacle in a wildly entertaining way, and while I cannot recommend it as a must-see, it was still enjoyable enough for what it was. Considering where NXT is right now, this is a fitting enough cap to the set.

So, NXT was the better brand of the bunch here for sure. The Dusty Classic stuff was decent, Finn's reign added another chapter, UE imploded, and Gargano reminded us that he's still Mr. NXT. The reigns of Drew and Roman made up a big part of the focus for the red and blue sides of things and, of course, we saw Miz dethrone McIntyre near the end of the month. Not a terrible month, at all. As always, I suggest checking out the matches rated at and above 3.5 and only consider the rest if they really catch your eye that strongly.