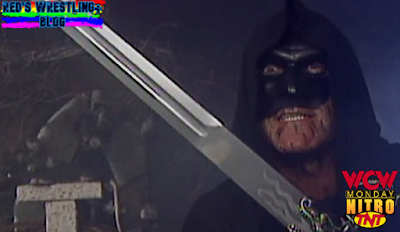 Hogan's promo to start this was so fucked it made me think someone had slipped me acid or something. What was especially fucking weird was how Halloween themed this was despite being a few weeks past the holiday at this point.

Savage beat Meng in a very meh match and, instead of a decapitation after, we just had Lex trying to rip an arm off.

The next one saw Benoit against a dude that they promoted as getting a title shot that week. So, what did they do? Did they build up the challenger? Nope, they made him look weak, falling in under three minutes. To be very clear, Sasaki is an awesome worker and this match was actually a solid sprint. Still, the booking call baffles me here.

A Television Championship match saw Badd and Eddy working a time limit draw, which was decent but you could tell they were padding time terribly at times. A great match hopefully comes next between these two, because even here there was a good one hidden between the average parts.

Sting and Hogan is announced for next week and then The Giant and crew do Dungeon of Doom stuff.

Our main event this week saw Sting beat Malenko with a flash pin in a solid throwaway match. After, Sting talks with Mean Gene about how he's no enemy of Hogan, but he wont roll over, either. Decent promo.

Honestly, this week had loads of potential but didn't deliver. The card alone screams "EPIC" but what we see here is an hour of average wrestling television. I'd say skip this in your watch along unless you want to see big matches treated like afterthoughts.