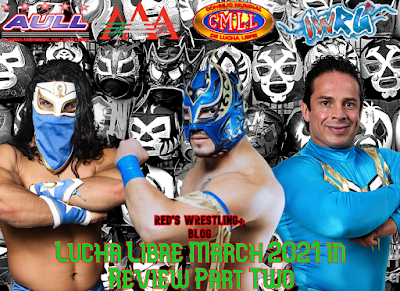 The first match was a good brawl with the rudos playing their roles well. The finish saw a dq after a turn due to a miscommunication. It was fun for what it was.

Up second, we had AAA's little indie allegiance once again, putting on a good tag match building off the first bout. Another janky finish.

Speaking of AAA, Laredo Kid put his Cruiserweight belt on the line against Arez in a great one for our third match of the set. Laredo has always been a fun worker but props to just how fucking good he's elevated himself of late. Arez has also been fun every time I've seen him and his a high ceiling.

The semi-semi of the set is from CMLL. Bandido decided to make his last BIG match in CMLL (for now) matter and got Volador to step the fuck up. Volador Jr is sincerely an awesome wrestler, but he is the king of phoning shit it in a company that phones nearly everything in. This was beautifully executed spotfest stuff for 30 damn minutes full of near falls and highflying and, as a result, it truly rocked. It's for sure my favorite thing on this set and that finish alone makes it worth watching.

I need to take a moment to rant real quick. Skip ahead if you'd like. Last week, some dipshit decided to use fraudulent checks and steal money from my family. The images of the scanned checks have numerous red flags and my bank missed each and every one of them. They stole 3k before I noticed. After I called to try to get the situation fixed, another for 4k tried to clear but I stopped it in time while that one was pending. The other two required me going in person to a local branch and signing a form. Then, over the weekend after being told it wasn't possible for it to happen again, another for nearly 2k was cleared. I had to wait until monday to call the bank since they are closed over the weekend. I was told that the forms I signed on Friday were the wrong forms and that it now required different forms to be signed and sent in. Then I'd have to wait for two weeks before someone was assigned to the case and then I'd have to wait until they finished their investigation before I'd find out if I even get my roughly $5,000 back.

The red flags in question on these checks include:

I was told numerous excuses and the last person I spoke to on the phone was clearly reading from a booklet on what she was supposed to say. If I was stupid enough to rob a bank for this amount, I'd be behind bars in minutes. I get robbed for an amount that the banks wouldn't even pick up if they were to drop it and I am being basically punished. The recommended action for me is to change to a new bank account which causes numerous additional issues, such as the things I have charged monthly to the account would require updating which could take hours. I also am waiting for refunds and other payments from the IRS and it'd be a headache fixing that problem according to the passive aggressive rep I spoke to today during a 67 minute call today. And I've already spent several hours and two trips in person on this already.
Fucking SIGH.

We actually semi with one more from AULL, with Villano III Jr defending gold against Centella Oriental. The match is part of the big angle of this set. A bit overbooked at times, this was still great stuff and hit about what I had hoped. Worth a consideration for sure.

I added one more at the last second, this one from IWRG. Some mouth flapping to start and then they dug in. It didn't take long before a pool of blood began to flow. Red dripped violence and honestly just a badass, brutal battle between the two. A bit rough around the edges, but still worth seeing and great overall circus action.

The world of lucha libre provided some fun gems in March for sure. AAA still is the king of the genre, with AULL by proxy coming off as worthwhile, too. IWRG continues to pump out good shit from time to time. CMLL was kind of here for the ride as usual but had one legit awesome showcase, at least. Check out anything that catches your eye!