It's Time to Talk About the NWA, a Look at When Our Shadows Fall and the Future of the Brand + Powerrr Spoilers 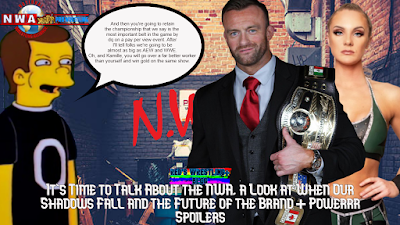 When Our Shadows Fall, the latest special event held by NWA, took place last weekend. Did you even know the show was happening? Would you have not for my preview, which was one of only two I found on Google? If you did know it was happening, did you bother watching it? Did you take my advice and wait to see the reactions? Did you see the reactions, presuming you knew anyone that bothered to check it out at all, and decide not to spend your money on the show? Worst, did you actually pay for it and walk away feeling cheated?

See, if you can't tell, the NWA didn't do too well.

Lets start with the identity crisis they're having, first. So, NWA diehards that sold the idea that Powerrr was the only weekly show worth watching, yes they exist, would often say that the NWA is wrestling done right. They'd see that logo and get all nostalgic and think everything happening was golden. It's a cultist thing, but diehards always do that, feeling the need to over-defend something they like to the point where they're acting like no faults can be suggested. AEW, WWE, NJPW. They all have those fans. NWA hardline folk are super against "flippy shit" and many sing in the choir at the Church of The Cuck where the idea of having lucha libre throwaways on their shows is blasphemy. They've had Matt Cross, one of the underrated kings at the Mount Flip, for a cup of coffee now but seemingly even when used he's kept toned down a bit and kept to a minor role. But to invite Bestia and Mecha in for a match feels like something fans wouldn't care much for. Maybe a slope fans won't be super comfortable with. Maybe I'm wrong, though.

Second, lets talk about the women's match. See, Deeb has made herself one of the most well respected names in women's wrestling as the NWA Women's Champ despite having not worked in an NWA ring for years. I get the story they're telling with Kamille, but I know a lot of fans were very disappointed to see the change.

For those that care, that's the only match from the event that I watched in full.

Serena worked her ass off and made Kamille look better than usual. The problem here is that Deeb still looked far superior in every way and it makes the change feel a bit thudish as a result. The story is there and it makes sense from that standpoint but that's about it. It requires a lying eyes approach to be excited for the change. It also likely means no more NWA Women's Championship matches in AEW which is a shame. It was good PR for NWA and allowed the women of AEW to have more to do, since that company has some issues with giving women time. I'd add, on a related note, that I think we're getting Cody/Aldis III soon which fixes part of that issue, especially if Rhodes gets the nod.

Moving along, lets chat about the complete lack of build this show got. Outside of the Women's and World Championship matches, the former which barely counts, the card had no build until days before on a B-Show episode. No fed should be excused this. Most didn't know what was happening on a show they were trying to sell for $20 until the NWA Twitter posted the card. Weak shit.

There are so many wrestling promotions around right now and so much back content that even a nerd like me could never catch up. There's too much to watch each week. The NWA is literally only even in conversations because of the logo attached. Take that away, and they'd be random indie fed that few people care about #5340. So, let me make it clear that I get that Corgan is trying to appeal to a select group but that group isn't the type that will sustain them. In my opinion, at least. The demo is aging themselves out and they haven't done nearly enough to appeal to the younger crowd. They pissed on themselves by cutting off of YouTube and forcing you to pay using Fite, which I have issues with too, and keep hiring problematic folk. Sure, they've reacted to pockets of outrage at times, but keep up the practice and currently have a handful of people that are overdue for liberals to research. You have to be cool and do EVERYTHING you fucking can to keep fans happy.

Ending a special event that fans spent $20 on that was filled largely with average at best wrestling with a cheap, fuck you finish in 2021 is not smart. In fact, it's fucking laughable that it even got approved. Alas, that's what happened. That wouldn't work in the 80's, let alone now.

On the follow up episode of Powerrr, they got some good buzz for announcing an all women's special event and that Mickie James will be involved with NWA. I can only figure that the event will include some folks from AEW, CWFH, etc. seeing as they have so few women working for them right now. I'd love to see Nyla Rose work it just to piss off a pocket of the diehard base they have. I have a list in general that I'd like to see involved, especially from the most predictable pool (CWFH), but I won't go into that right now. I really want that show to succeed so lets just cross out fingers and leave that alone for now. Mickie is a legend and I wish her the best here.

This next part is a bit dry, but it covers the taping results.

On said tapings for the next few episodes, we saw JTG seemingly getting set up for a decent push, with the Cryme Tyme dude besting Rosser and dipshit Sam Adonis in a three-way. Kylie beat Melina. Tyrus squashed two dudes in a handicap match and then Slice Boogie dropped to Crimson. Chris Adonis won a three-way against Parrow and Latimer. Rockett was given the nod versus Plunkett. Jennacide defeated Lady Frost in a match that sounds like something you'd see in an off brand super hero fighting game. Stevens, Mims, and YUMA took on Hawx Aerie and Kratos in a match that ended in interference dq, because that's what fans love to see. Tyrus may or may not have won the TV Title from The Pope which sounds super tone deaf, especially after I saw numerous fans reply to tweets early in the year saying they wouldn't watch is Tyrus was booked. The Pope apparently got a win back against Sal Rinauro because everyone goes over that dude. Deeb and Kylie worked a match where they beat Skye Blue and Thunder Rosa. I wanna see that one, actually. Hawx Aerie and Sam Adonis, called El Rudo because god forbid two dudes going by Adonis be on one show and risk confusing inbred folks, beat Mecha Wolf, Bestia, and Homicide in a lucha rules match because why the fuck not. Chris Adonis beat JTG to send him back down a few pegs. Aldis defeated Odison and Trevor defeated Latimer. Mims beat Jax Dane and Colby Corino of all people appeared and beat Sal Rinauro.

Now, if you're still with me after reading that, which felt as dry as when The Bible talks about genealogy, ask yourself if that sounds like it has enough going on to make you actually want to tune in for an hour or so each week for a few. Sure, maybe a match or two that sounds okay on paper appears during that, but will you actually spend money to see that match or so and also all the rest? Some will and if you love the product, honestly, all the power to you. You're a rare breed and while I knocked some of the diehards, I know many are cool people that just have a preference and I'm all for that shit. I just know it's a very small group regardless and I see very little that actually seems that it'd spike anyone outside of that group.

So, what should Corgan and crew do? They need to actually find someone with their ear to the ground, stop listening just to butt kissers, hire better analytics and social media folk, and step the fuck up. They do have a logo with enough history attached that it's not too late to shift to the positive. It just take some changes that I admittedly don't expect to happen.

But, on the off chance that the NWA becomes a power house like Corgan thinks it does again and becomes the big 3rd brand, I will make this pledge:

If that happens, I will print this long ass ramble that no one asked for, cut it up a bit, mix some sauce or dressing or something, and I'll eat the damn thing. For the sake of the good folk that are employed there, I actually hope this is something that happens and if it does, I'll even upload the video to whatever fucking video site is the most popular at the time.