Flying in an Ace: Takeshita in AEW 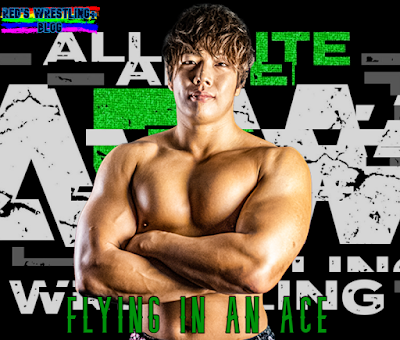 The ace of DDT was recently brought in for a series of matches in AEW, and it's WELL PAST time I take a look at the output. Note that longtime readers of the blog, as well as folks that knew me before I even started this site, know I am pretty big on the dude. I legit consider him to be one of the best active workers in the game and one of the hardest working, most well rounded, and most underrated dudes I've ever seen.

This was a fairly good, sub-10 minute first match of the trip for Takeshita. Limelight was super in his role, as expected, and Konosuke showed once again that he'll step up no matter what. I mean, this is a throwaway match on the C show for the company. More than just a good match, this was a good introduction to fans unaware of how good KT is at what he does.

This was pure fun. Honestly, if you've never watched DDT before but enjoyed this, I think you'd LOVE DDT. Some comedy and some nice action. That describes DDT pretty damn well. Real quick, I'd like to give quick props to the commentary team, especially Giant who seems legit happy right now. I'd also like to give props to Limelight. If not for Murphy's release today, I'd say Limelight is the best unsigned dude for AEW to step up on. Takeshita has been fun in these two, of course, but Limelight has been a standout.

This one sadly doesn't appear to be online. I might be wrong, but I've historically been decent at finding stuff. I want to see it because this huge cluster was a house show match and I'd love this set to be more complete. If you have a link, help me out.

So, after watching these two and thinking on it, I'd say that Takeshita did not show the fans of AEW that he's an ace level talent here. He was a very serviceable plug in visitor and a good rep for DDT. That's about it. Still, he was indeed serviceable and got the W's in both matches, one on the same team as Omega, so I think we'll see him back. I hope next time it is a bigger platform, for sure, and I'm not disappointed with the overall situation even if I know Kono is far superior than what was on display here. Give these a watch if you're an AEW fan that missed 'em, and hopefully use them as a bridge into DDT, but if that doesn't seem like a fit for you feel free to skip 'em.

Oh, and watch this week's episode if you wanna see an unrelated debut ;)