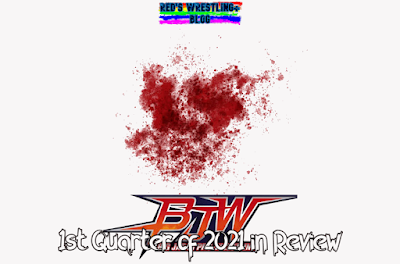 The first three months of BJW had some decent stuff for sure. If time wasn't a thing, or if I had more of it, I'd make far more time for this promotion than I do. Alas, that's not reality so here we are.

The first pull was a pretty good title defense from one of my favorite meat castles, Okabayashi. I feel like the title change is not one for the better and that Yuji is far better in that role, but many companies make changes like this at the start of the year in Japan. It is what it is.

Up second, Crazy Lovers took on Parker and Shunma in a great death match that really built up nicely. It's hard to not enjoy something with these dudes in it and they for sure stepped up decently here. Was it largely just a violent throwaway? Sure. But it was a great one nonetheless.

Our third pull was my favorite of the set and a fantastic tag match in general. I love the team of Okabayashi and Irie but have to give major props to Nakanoue and Aoki here. I'd add that the new Strong Champ looked better here in my opinion than he did in the title change, but you might differ on that. Either way, this is well worth checking out and was creative fun.

Match four promised to be bloody AF and it...it didn't take long for the promise to be fulfilled. Slow and menacing like Nemesis at first and like a Baker after, this simply rocked and was one of the better deathmatches I've seen in a bit. Brutal stuff and the only thing I didn't like was the finish which I think could've been better. Great overall and a nice cap to the set.

So, Big Japan started their year with new top champs. The Death division saw Takumi dethrone Fujita in a match that got pretty iffy responses. On the Strong side, as mentioned above, Okabayashi was taken down in a pretty good match but the new champ, in my opinion, is a step down. In February the Astronauts took the tag straps which is at least a good move. Violento debuted and there clearly was some pretty good stuff, even if there was some disappointments, so yeah, go ahead and check out the matches that seem interesting to you and give this roster some love.