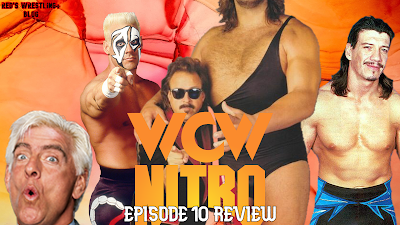 It started with a squash, which saw The Giant defeat Cobra in less time than the latter took to enter the ring. The Morse Code entrance is golden shit.

An ongoing theme of this one is clips of backstage segments with various roster members waiting to see who the fans would choose to main event the installment. Sting and Flair were eventually set to compete.

Dark Side Hogan and Attack From the Light Savage talk on the beach.

Next up, the Ultimate Renegade falls to Taskmaster in a "match" that doesn't even deserve this sentence.

Benoit and Eddie had a good throwaway match with an interesting finish. Sparks of brilliance behind the surface here and a possible heel tease for Guerrero?

The main was good too, of course. Flair was a cheating dick and Sting kept overcoming everything, eventually taking the W thanks to a Scorpion Deathlock. He held on after the match, we were told Lex was coming out (he wasn't) while random roster members "tried" to get him to let up. Lex eventually came and got Sting to go to the back. Whatever he said was teased to be a big deal.

The episode ended with convoluted garbage. The Giant was announced to be the legit champ at first until...he wasn't, and it was said that the winner of WW3 would be the new champ. Meh.

So, this was mixed bag stuff, but honestly a good episode overall. It went by quick and the two matches I enjoyed were given more time than the stuff I didn't care for. I'll take it.

Digest: A reminder, but I am living on the edge of town for a bit and, while I love the vibe, I also have shit internet. As a result, these are going to be a bit less frequent in quantity. I am also, as always, fucking around with the format a bit for these. A warning, perhaps? Whatever. Anyway, up first I took a stroll through the AEW YouTube channel to see what was being offered up. This, depressing bit of misfortune, was my first taste from the menu. It was raw as expected from the master of the mic, with CM Punk letting us all know that he was jacked up and off to the glue factory. I was beyond hopeful that we were about to get a spectacular Summer of Punk III. Instead, we're getting Mr. Pipebomb walking away to recover. Seeing a bunch of men that you can tell were taught to never show emotion holding back tears is always glorious. Holy shit, this was legit! Bucks/Lucha Bros VIII was just a random match on a Friday night that just happened to be a banger. These four continued t