Quick Thoughts on the Subject of Increasing Minimum Wage 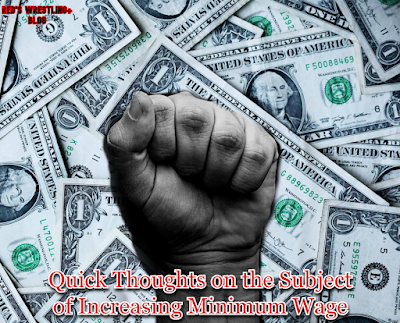 A lot of the discussions involving a minimum wage increase are steeped heavily in political propaganda and The Other mentalities.
Lets keep it simple, though.

No one working a full time job is lesser than you. You might have a higher paying gig, a big salary because of a degree, etc. Some jobs should indeed be worth more an hour than others. You are still not better than the other person and they don't deserve ridicule or to live in poverty regardless of their situation.

Minimum wage jobs are not for kids. Sure, many kids work those jobs, but places don't shut down during school hours. Loads of folk work those jobs and they are, in almost every case, jobs that benefit others. Need a burger at lunch? Need daycare? How about the many very important jobs at a hospital that are paid minimum wage?

MW was literally intended to be the wage that someone can receive and, as long as they are working full time, that they'd be able to live off of it. Not by needing to work 80 hours a week, have 2 jobs, etc. If you don't want people using government assistance, pay needs to increase.

Regardless of how you feel about billionaires, they are indeed hoarding $ in a way that would make Smaug blush. We legalize bribery via lobbying and as a result many of the wealthiest either pay little to nothing in taxes, while their employees are a majority of those using Government assistance, or do that AND hide money while also utilizing loads of tools to further enrich themselves.

If the MW increases, and that makes it where some job you think is beneath you is making the same, ask your employer why they aren't increasing your rate, too. You have the power in that situation. If you can make the same amount "flipping burgers" as you can working at a hospital, and they won't increase your rate, consider jumping to the fast food side of things. It's so much easier, right?

Every argument against increasing MW literally can be debunked and reeks of punching down. You have more in common with your neighbors than you do the dude with 3 yachts and a shit load of NFT's.
Support each other and stop bootlicking for billionaires and poverty exploiters.
Other Things of Note Politics