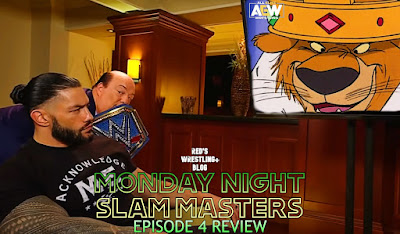 2.Six-Way Scramble: Ace vs Romero vs Phantasmo vs Williams vs TJP vs Raju ***1/2

Kyle had a moment with Oney to start this week's episode. After The Midcard setup, he backed up his words. The clips came off well and the right dude won. Post, Dunne and Lorcan beat down Kyle until Fish made the save. My six year old asked me why he returned but then they both said they weren't planning on teaming. Funny stuff.

Next up, Cody decided it was the 80's again and gave us a nationalism speech. Sure, why not. Listen, I like Cody. He's very much old school, but he makes it work and I tend to enjoy his shit. Hell, I gave his match with Dustin five stars. Those that know me know how rare that is. Still, I have a problem here. His new Miz style show is red flag stuff. His booking choices have been a bit off-putting. And now, this. I didn't care for this in the slightest and even the decent parts felt soured by it all. I don't care for patriotic based matches because I don't think imaginary lines on a map are worth bragging about so much that we book matches and rivalries over them. It's just not my cup of tea. It apparently felt the same to a lot of other people, too. The dude is too unshackled right now, honestly, and I think someone needs to reign him in.

The X-Division focused clusterfuck was a borderline great spotfest. It served well to showcase the six involved and especially to introduce Phantasmo to the audience. The dude can be pretty damn fun when motivated and placed in the right situation and you can go ahead and check those boxes here. Worth a look if you like car crash tv. Too bad they can't align the dude with Kenny and crew, though.

Nagata, Mr. Blue Justice himself, and Mox had a pretty good throwaway match. Honestly, if all we get for a while from this forbidden door stuff is random challengers for Mox every few months I'll take it. Check it for a fun brawl with a predictable outcome.

KUSHIDA and Fantasma's Cruiserweight strap match was great, TakeOver level stuff. I have no idea what they're gonna do with Escobar next, but I am hoping they now move on from this and we also get a decent run for KUSIDA, even if him holding this belt is a bit ironic. One of the best things of the week.

The other IMPACT pull this week was pretty fun. It was a building blocker, with everyone just getting their shit in, and it worked well for what it was. A fun sampler style match for those that want a taste of what the current product is.

The SmackDown cluster was also fun in a very similar fashion. It was borderline great and I appreciated the format. Real quick though, but who picked the style for this throwback episode? SmackDown wasn't a thing when they used that logo, for one. I'd go on but I think that alone is pretty fucking weird. Anyway, while I am never huge on Corbin getting W's, this was still worth seeing.

Miro killed Darby's reign, which I was very happy to see. Allin as TNT Champ was fun while it lasted, but the feud with Sky and Page doesn't need gold tied in and Miro really is a perfect trigger man right now to take over the spot. Like a lot of things this week, this was borderline great.

The Pinnacle celebrated their Blood & Guts victory before Inner Circle appeared, sprayed them down with bubbly, and then got MJF to agree to a rematch. Stadium Stampede, with a bonus stip that IC would break up if they lost. It seems a tad strange to have that added on when later in the episode in which this segment aired we'd have a similar added set on a match, but it's a minor thing. Funny for what it was I suppose but admittedly not my thing.

EC3 tried to play things straight while legit dipshit Flip Gordon was booked to be cheating when possible, including setting up a shit finish, against the Briscoe pair. The rivalry continues.

Hit Row, a new faction that looks interesting, will join the NXT ranks with Isaiah at the head. If it helps move Scott up the cards I am for it.

SCU was forced to split following a fantastic tag match against the Bucks of Youth. Blood poured down the fact of Daniels and we even got a mocking, "I'm sorry, I love you" spot. The drama was well done and the action hit the right spots, all together working to elevate this right to about where my expectations had set it. This was the best match of the week for sure and well worth checking out.

Bianca and Bayley shared a soap spot. Not terrible.

Thunder is back on Dynamite and picked up an easy win to reestablish her.

Raquel topped Mercedes in a good one, but one that never felt like it hit that next gear. Still, okay for what it was and Raquel continues to grow.

Baker, the baddest bitch in AEW, sat down with JR before her title shot. I see no way she doesn't get the nod. The time is right.

Jimmy returned which prompted Cesaro to come out, just to be attacked by Seth, who cannot get over falling to the Swiss Superman at WM. We got a Teddy Long return, which was fun, and a match between Rollins and Claudio out of it. Acceptable match for sure.

Lashley and Drew's match ended in DQ when Braun arrived and attacked. He powerslammed everyone 1,000 times and called himself a monster.

Kenny and Gallows interrupted an IMPACT match when their buddy, Anderson, was about to go down. Eddie and the brand tag champs ran the BC boys off after.

Kross made relatively easy work out of royal dumbass, Theory. After, Finn appeared and asked for his rematch. That was the real big thing here, and should be another decent title match before Kross moves to someone else.

This week had some quality action and story progression. Not too shabby.