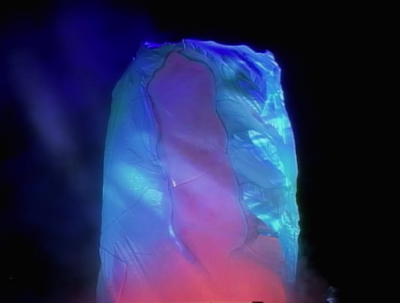 The booking for this one was another spit in the face of common sense but fuck it all, right!?

Up first, Savage and Kurasawa worked a decent match but I have no idea why it was set up. Savage came back from behind to win but was getting beaten down for about seven minutes beforehand. The dude is scheduled for two matches, one a big match, at Halloween Havoc. This, being the go home edition of Nitro, made me question why that seemed like a good idea. Sure, Savage won, but he was beaten down by a dude that was still a virtual nobody in the Nitro-verse. Oh well, it was entertaining at least even if it never broke out of second gear and Kurasawa looked great in his second Nitro match.

We then were given some acid in our drinks, clearly, as the Nitro debut of The Master followed. He was sitting on an elevated throne, shouting some shit that a drunk teen would say, and somehow came off even more drunk as he incoherently rambled. The Giant and Taskmaster joined Mean Gene to follow it up and build us more for Halloween Havoc. This all promoted the arrival of...The Yeti.

Hogan, again in black, referenced OJ next for more build. He called out Savage, Sting, and Luger here, too.

Wright came out with crutches which he eventually used to screw Malenko over and give the assist to Mr. JL and Eddie. Marketed as a cruiserweight match, we once again got a little breakaway for a random shot of The Shark and Norton battling backstage, but at least this time it was done while simultaneously airing the match itself. Truly, a fairly good match this was and another good spotlight for these dudes. Even before the cruiserweight division was officially a thing it was still the best part of Nitro.

Pillman attacked Eddie after for some reason. They didn't build his tag match with Arn against Sting and Flair at all this week, before the show, unless I missed it, but they did have him take out Eddie Guerrero.

For the main event this week, we had Lex and Sting tagging against Harlem Heat for some reason. We had Sherri pulling pics of her and Colonel out and kissing them, a finish that made Stevie look like a complete dipshit, and Luger looking awful despite the fact that he had two matches ahead for us on the upcoming ppv they were selling. Note that Harlem Heat won the Tag belts back from American Males on Saturday Night a few days after this which made this even stranger a choice. Booker was okay here but Sting was honestly the only thing saving this from a dumpster fire.

After, The Dungeon of Doom ran down and took out Lex and Sting. Savage tried to fight The Giant but Hogan called him off. Hulk and Giant then faced off a bit before being broken up. We were told the arena was shaking and then saw a mummy looking dude breaking from the ice as the show faded to black.

WCW Nitro has been a fucking ride. Like, it's a parody and tragically terrible to a laughable degree at times. It also has a lot of entertainment value and some legit good shit mixed in. It's so fucking bad that you find yourself enjoying the bullshit. My kids are loving it which helps, too. Plus, seeing stuff like the midcard match here helps soften the punches a bit as does the short runtime. This was more miss than hit, especially for a go home show, but I still had fun at the very least.

My review for Halloween Havoc should be up on Sunday if all goes right. Thanks, as always, for reading.