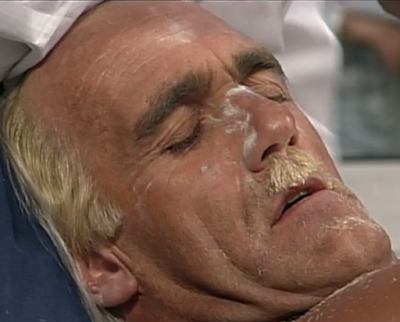 This was a highly entertaining episode and arguably the best since the debut.

We start with Flair yanking the headset off of Bischoff to call out Arn and then move to our opener, which saw Lex and Savage finally face off after weeks of build. While the match was far from great, it was completely serviceable and both dudes looked motivated here. The finish saw a ref bump, The Giant taking out Savage, and then Lex getting the win with a Torture Rack. I have no major issues with this, to be honest. It was an opener with two big stars, having a clean loss on Nitro with these two would have been a bad call, and it keeps the story moving.

Disco Inferno tries to come out but Eddie thankfully shames him back to gorilla and we get to our midcard. Now, I am trying to catch up on ECW Hardcore TV so I can watch, review, and post about WCW and ECW once a week and in doing so I've gotten to and past the part where Eddie and Dean are having great matches. I just watched an installment recently where they spent basically the entire episode on just them wrestling and it was fucking great. WCW, on the other hand, gives us a match with them and they cut away backstage so we can see Hogan getting out of his limo for fuck's sake. Like, what a terrible move. What we saw was good stuff but it's hard to say more about a match that's given this little respect.

We then get Hogan randomly coming out to just say, "well, he's not here guess I have to keep looking" like a fucking noob. He goes to leave but is attacked by...sigh...Taskmaster dressed like a grandma. Is that what they meant by making sure grandma was out of the bathroom? Anyway, jokes aside I liked most of this segment. Hogan looked like a dumbass and Giant snapped his neck again and then looked like a fucking monster again by clearing house. What I didn't like at all was the tag champs getting destroyed, though. They could've ran anyone out there but instead used the new champs and their challengers which lessens that match when it happens. Oh well, it was at least more good than bad and Hogan was shaved which was funny.

The main event saw Flair and Arn one on one and honestly it was a good main event and a nice, short match. They told a solid story and kept the angle going with the finish, which saw Brian Pillman run out and give Ric the win via DQ right as AA was about to give up.

Post, as we fade away for the week we are told that next week we get a rematch...IN A CAGE!

So, this week was interesting. The matches were all enjoyable and the it was an hour of entertainment. I have a few question marks here but the biggest is admittedly why they had to throw us backstage for a needless segment with Hogan instead of letting us see a complete match between Eddie and Dean. I mean, they were stolen away for a reason and now are being done that way...

It is what it is. Still, even with that and the shenanigans I have to say that this was a good episode and, as mentioned at the top, one of the best since the debut. I look forward to next week.