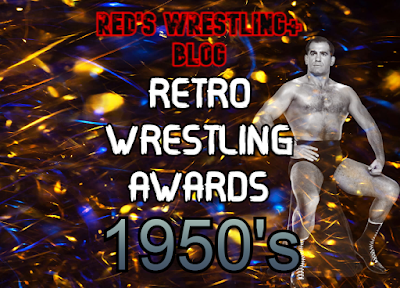 Lou Thesz and Buddy Rogers put on an epic match in front of a legit crowd in Chicago, and for 30 minutes they traded blows and holds through a best two out of three falls battle that ended in epic fashion as Buddy got trapped in the ropes as the ref counted him out. The work here was high shelf caliber stuff and I strongly recommend fans to check it out. Find the match HERE.

Wrestler of the Decade: Lou Thesz

Promotion of the Decade: NWA

So, this shouldn't be very surprising considering the winners of the other two categories but it needs to be stated clearly that the NWA was the pinnacle of the sport in the 1950's, specifically the Chicago area sect of the body. Large crowds and in ring content that still holds up nicely today, NWA was the leader of the art at the time and no one else came close.