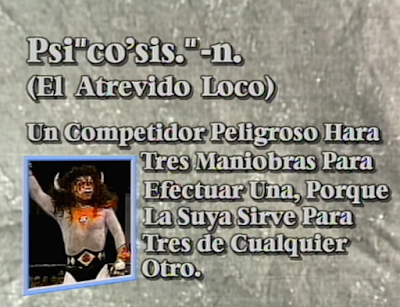 Beulah opened the episode with an over sexualized request for fan questions. Sadly, this is one of the things that was stolen by WWF later and it set back women in wrestling for years.

Joey hypes up the first match of the episode, we get some clips from their first ECW match, and then an encyclopedia spotlight airs.

Bubba is introduced to the Dudley family.

Psicosis, out first, holding the WWA Welterweight and Trios belts and Rey followed shortly after. The crowd was buzzing right off the bat and for good reason.

The first fall was quick as a damn bullet and saw Rey speed through for a pinfall over his rival. The second saw Psicosis even it up in a slower, but still very briskly paced and generally awesome fall. Things really went off in the third, building nicely off of the promises made in the first two. It was fucking insane.

As fantastic as their first match in ECW was, this was even better and a near perfect contest in general. Simply put, it was solid fucking gold. It doesn't get much better than this.

A backstage segment promoting the Hardcore Phoneline aired next followed by Joey building up the rest of the episode.

Richards and Raven faced The Pitbulls, with 911 and Big Duck Dudley at ringside as lumberjacks to close this. They clipped ahead with a flash of lightning and we saw Pitbull #1 down for some reason as Francine tried to wake him. #2 got a DDT onto a chair from Raven. It jumped ahead again and more chaos ensued. Just chaos. They didn't air enough to rate this but know that Raven and Richards won the belts back here and then Gordon and Alfonso fought. Richards gave the heel ref an upper hand and Gordon was left bloodied and broken.

The only match shown in full here was amazing. The rest was acceptable at best but completely skippable as long as you know that Cactus helped Raven and Richards and that Alfonso left Gordon humiliated. Watch the match, skip the rest. It's the only reason it's rated as high as it is.