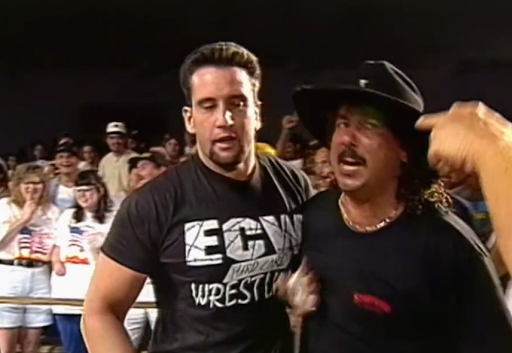 This one starts with clips from the classic Eddie/Malenko match as well as a rematch that happened at a house show. I have no idea if that match is out there somewhere but I wanna find it one day. They promoted a third under 2/3 falls to come!

After the intro package, we got a look at what's going on with Cactus Jack including the shit match with Sandman as well as the drama with Douglas. That match at least should be decent, but sadly this one has a rematch versus Sandman with Shane as the ref that I have to get through, first.

The opener was a fun walk and brawl with Dreamer and Raven. Raven bled, they worked the entire arena, and they used a lot of weapons. While I didn't see it as being on the level of their best match I've seen on this watch-through so far, I still thought it was fun stuff and they kept it going with Raven once again getting the upper hand on Dreamer. Not too shabby.

Post, Dreamer hit Richards and the ref with DDT's and then Beulah a piledriver. Basically, they repeated the iconic moment but instead of Dreamer walking into the crowd and chanting EC Dub, Raven got up in time to land a chair shot and a DDT. As Dreamer started to fight back, with Richards and Raven, and the numbers game seemingly about to be too much, Luna Vachon ran out for the assist.

The segment ended with Dreamer and Luna embracing before a backstage promo from both solidifying their union moving forward in the ongoing plot.

The Pitbulls mock Public Enemy next in another feature.

For the main event this week, we have Sandman defending against Cactus Jack. I mentioned it above, but I was not looking forward to this. Jack is always good but Sandman can drag down anything he touches and Douglas as ref guaranteed to make this more about plot progression than anything else, seemingly ensuring the quality would already be lessened. Props to Woman at least who has been doing a good job in her role given to her on all of these episodes. She made the best of what was given to her. The match saw Shane trying to keep things straight, largely nerfing the one thing that could have made this enjoyable, and a a bunch of bullshit from bell to bell. When it finally picked up, after Woman was tossed out, it still wasn't very good. Hell, at one point Sandman got in a low blow that Douglas missed because he "had something in his eye" and more heel ref shit followed. There were clearly weird cuts too that fucked up what little flow we had.

It ended in disqualification.

A music video closed the episode.

The first half of this was at least entertaining. The second was the drizzling shits that I only watched because I wanted to make sure I saw all major angles during the walkthrough.