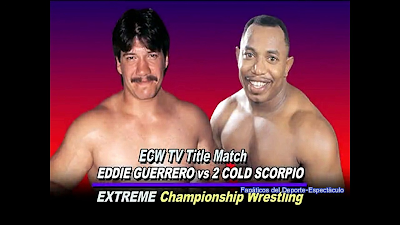 We start with notice of Sabu being suspended for going AWOL. This is during the span that Sabu would go to NJPW and WCW. This led to a promo from Benoit referencing the issue while calling out Taz. This led to a bit of brawling that included Benoit, Taz, Malenko, and...Rick Steiner! Good shit and the "fuck Sabu" chants were perfect.

The first match of the night saw Too Cold defending the TV Championship against Eddie Fucking Guerrero! It's Eddie's debut match for the company and while normally I'd be wondering why a newcomer is getting a shot, here I get it. Even without the gift of hindsight, Eddie was already a major rising star in  1995 and this was a fun choice. Scorp was banged up in this one but it wasn't overplayed. Instead, we got a very good match that saw Eddie come out on top by the end and it very much felt like one of the matches that shaped the scene today. I honestly recommend this to any wrestling historian as it was pure fun top to bottom and even the flash pin here was fine.

We followed that up with yet another amazing, top notch Foley promo, a look at the branding incident, and a nice promo from Funk to top it off. Good shit!

Up next, Shane Douglas defended the ECW World Heavyweight Championship against Sandman in a match that was aired in clipped form. Honestly it wasn't much of anything, was a terrible match, and really was more about serving as a rider for Woman defecting to Douglas than anything else. Still, while the match kind of sucked the defect was noteworthy and it was at least kept short.

Sandman's promo after was about as expected. Shane's was far better but still one of his weakest and I honestly don't care for the feud much in the slightest.

The episode closed with highlights of Public Enemy winning back the Tag Team Championships from Benoit and Malenko in a match that also included Rick and Taz. Despite his promo on Sabu, note that Benoit went on a tour of NJPW shortly after this and then left for WCW, too. Malenko would soon follow. The match didn't look like much but the clips made the best of it.

This episode is hard to rate, but I give it a thumbs up overall. The opener rocked, the Funk/Jack stuff was great, seeing the defection was important to the story, and we closed with clips of a title change. Go ahead and check it out if you want a full episode of ECW or at the very least watch the first half.