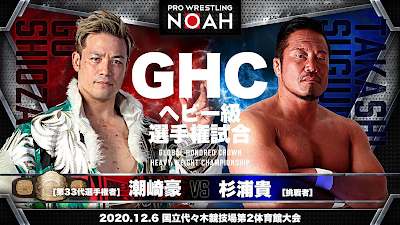 The first match was another fantastic display from two of the best in the game. Hiromu is the ace of juniors and there's no way around that in my mind. You cannot change my mind. SHO is destined to be a big star in the heavyweight division sooner than later. In all, this was a very entertaining battle that built nicely.

Next, Go and Sugiura. Go's run with the belt was truly a thing of beauty and cemented him as an all time great. This reign is one of my favorites ever and, not to get ahead of myself, but I am honestly disappointed that it ended the way it did. More on that when I get caught up. I'll also be talking about that logo change around then, too. But yea, the challenger here has a long history of elevating matches into must-see so mixing that with this champion, this championship, and this promotion on a big scale promised to be noteworthy and indeed it was. Fuck, that's an understatement. The ebb and flow of pure violence and passion. The brilliant display of fighting spirit. Go was a beacon last year and this match was a poetic cherry to cap his 2020. I loved every second and can without a doubt call it my MOTY and one of my favorite wrestling matches ever. WATCH THIS NOW!!!

I had to take a break after that.

Match three was interesting. While a bit rough around the edges and featuring a first half that didn't hit the right marks for me, the entire thing changed down the stretch. A fire was lit during the unmasking and they worked hard following that moment for sure. It truly was a super memorable moment that was very well done. Overall, I landed at 3.75. I know many had it far higher. To each their own. Despy has been a very decent hand for years and can pull the trigger decently at times and hold his own. Hiromu is a god even if he was a bit off here. The right one won. Don't expect much to happen with El Desperado after this.

In the four spot, Toru and Takeda destroyed each other in one of the best death matches I've seen in recent memory. It was a spectacular bloodbath of epic proportions. The swanton dive to the outside was easily the spot of the match and the amount of tubes used was truly epic. If you enjoy death match wrestling, consider this one a must-see!

I closed the set with a great joshi bout from Ice Ribbon. It was simple but simple done extremely right and I expect 2021 to be a great year for both performers. Saori in particular has a good amount of charisma and a truly beautiful bridge. Suzu is a pretty damn complete worker for those unfamiliar. Worth considering for those that missed it.

More to come. Thanks for reading.