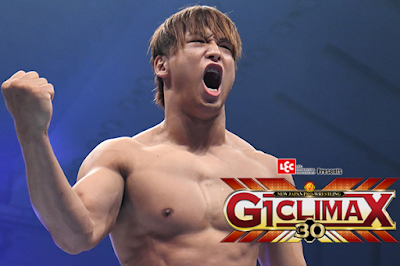 First, root bear and canadian whiskey tastes like drinking maple syrup.  Second, let me state loud and clear right now that Batman Returns is one of the best Christmas movies ever. Third, it's time for more G1 content! Note that with the holidays and my move coming up, I've come to terms with the fact that I will not finish 2020 content until late January at soonest and that the award announcements will come rather late too, and that's okay. I do things as I can and I enjoy things as I can.

Our first pull of the evening saw Jay White and Will Ospreay one on one. I actually like Jay far more than most it seems, though I am rather fond of the Bullet Club despite all of their flaws. The guy was talented but when he was plugged into the Kenny spot he truly stepped up. And while the typical BC stuff was in place here, it was one of those times where the coin flipped on the positive side of things and honestly nothing was hurt too badly as a result. The layout worked well enough and the action was tight throughout. I'd have preferred White take the win, but in all this was great.

Up next, a battle of the gods and a MOTYC.

SHINGO and Ishii are masters of their art form and displayed as such in this epic encounter, with brutal blows exchanged evenly. We're just lucky they didn't destroy the entire country of Japan. This is my kind of shit and I highly recommend this.

Taichi and Ishii in the four spot. Admittedly, I find Taichi to be hit or miss, leaning more towards the latter. Despite that, when he's on he's on and here...he was fucking on! Ishii was god form again and Taichi stepped up and more than held up his half of the bargain. Fantastic!

Ospreay and Kota next and yes, they recreated THAT moment. Flippy shit done right once again as these two are truly masters of their style. It really was artful and the entire match was brilliant due to their willingness to blend pure, unbridled athleticism and stiff shots. MOTYC!

We close with the third MOTYC of the set, with SHINGO and Ospreay in a match of dynamics. SHINGO's time in DG allows him to still work perfectly against hybrid perfomers like Kota. Their brisk pace worked perfectly and while the entire thing was relatively simple on paper, they are so damn talented that it just worked masterfully.

I know New Japan has gotten a lot of shit this year and it's not all unfair criticism. I don't ever give a fuck about brands that much anymore these days outside of praising rosters themselves, but I will say that the company still plays home to the best roster overall in the game and the G1 is still the ultimate showcase. The third, and final, part of this review set should be up as soon as possible as well as more reviews as I continue to move forward.