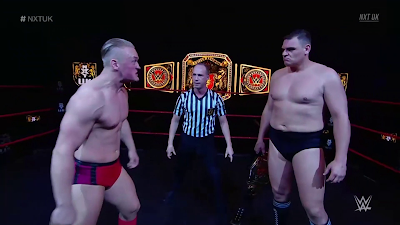 Props to the talent for sure in this collection. I can be pretty hard on WWE for a variety of reasons, but I am always the first to admit that their roster is one of the best ever right now. The issues are not with how talented the crew is. This month showcased just that. I found nine matches I wanted to see, plus the Halloween Havoc show I just reviewed, which is a lot seeing as I usually only have a small handful,

Up first, three from TakeOver 31.

The Cruiserweight match was pretty good. I liked seeing two Lucha Underground alumni working together again and they worked hard for sure. Fantasma was the right winner, too. Worth seeing and a nice way to kick this off.

Next, Io and LeRae worked a great women's contest. I could have done without the shenanigans down the stretch, but it is what it is. Post, they teased defenses against Toni and Moon which was a nice cherry on top.

The main from the event was a MOTYC, with perfect pacing, nice technical touches, and stiff action as they built up this into a fire storm. Kyle had a star making moment and Finn reminded fans that he's still a top name. I loved this for sure and highly recommend it.

Next, a trip to NXT UK. I've said before that the brand feels very soulless but the same is true in my opinion of much of WWE, sadly. That said, as alluded to above, the roster is so talented across every brand that it's impossible to not get something worth seeing from time to time. Well, here, we had one hell of a tag team war. It was almost MOTYC levels, even. The intensity and pacing was well done and I loved the outcome.

From SmackDown, Seth and Murphy had a pretty good throwaway battle. I remember thinking Murphy was one of my favorite workers during his 205 run but then he was brought up and became just another face. Now, he's working programs with Seth, at least. There's a better match in these two that we might get one day, but this was a nice start.

Three from Hell in a Cell. What's up with the red cell?

Roman and Uso had a match that relied on you caring about the storyline they were telling. The wrestling, like the previous match, wasn't the selling point. The drama was, and damn it was dramatic as fuck. Great stuff in that regard and in all I'd say this was pretty enjoyable as a result, even if they could have handled the layout a tad better. Roman's heel run continues to be one of the best parts of WWE in 2020.

Sasha and Bayley time. I've enjoyed watching this feud and it's my daughter's favorite story this year. The intensity has worked nicely and the story is simple but well done even if we've seen this before many times. Props where they're due, still. That carried over nicely here, with them both selling the angle and stepping up. I still think cell matches need to be saved and that the gimmick shows need to die, but this is a match that belonged in the cell the most on the card. The layout wasn't the strongest, either, but it was still great stuff regardless and I truly enjoyed it! The right person won and the finish was perfect, by the way...

Closing that show, Orton and Drew went to battle once more. I've liked Drew's run and I give Randy props for seemingly being more motivated this year than I've seen in a long time. This feud feels like it never ends but it's at least made for some good content. While I stand by the statement above that the women's match deserved the gimmick the most, I have to say that this match was the best use of the cell of the trio and a fantastic battle.

Closing the set proper, we have the best match I've seen all year. WALTER and Ilja were allowed to do what they do and what they do is magic!  You've likely seen the praise and every inch of it is well deserved. Every chop, every strike, every near fall. It was pure, beautiful violence that started hot and never let up and you HAVE to see this right this fucking second!

October was a good month for fans it seems and even WWE diehards that refuse to branch out had a lot to rejoice over. Check out what speaks to you if you missed 'em and thanks for reading.