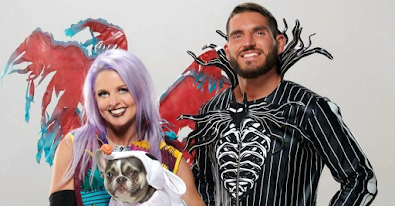 I love the Halloween Havoc gimmick. Let me start with that. I am admittedly disappointed that AEW didn't land the copyright, but at least them existing forced WWE to revive to concept. While NXT might be little more than a counter program right now, the talent is so good that they can rise above the bullshit and it seemed like a tall task to mess up Halloween Havoc. Lets see...

I dig the atmosphere off the bat and Shotzi is a perfect host.

The first match was a good start, with some fun brawling. I was never super big on Punishment but I do consider Gargano a truly great worker even if WWE has been very strange with his booking. I think his stay on NXT shows that the entire company fails to know how to handle longterm planning. Anyway, the dude from Scream ran in at the end and helped JG win the strap. Priest using the Stinger Splash was...interesting...

Pat cut an okay promo next, alongside the tag champs. The big takeaway of the segment was Kyle running down alone, Dune joining as if he was there to help, and then Kyle being geeked when Pete turned. It was...ok.

Atlas and Fantasma (wearing Rey inspired gear) worked a sprint that ended with the NXT Cruiserweight Champion standing tall. They apparently aren't calling Jake's finish the LGBTDDT. He also is without the rainbow gear I am used to seeing in in. Interesting. I wonder who made that call. Completely skippable stuff sadly, with interference setting up the finish and it lasting only a few minutes.

The next match was the Haunted House of Terror...a cinematic match with some Manson. I am still surprised Lumis is signed, but it is what it is. Note that I also miss Trevor Lee outside of WWE, largely for his matches in CWF Mid-Atlantic, with that epic title run he had, and PWG. It is almost fitting that he would be in this match, considering his history with Matt Hardy. He played this as being terrified throughout until the moment he tried to seduce a demon. Ignoring the rambling, caused by a severe lack of sleep once again, I'd just say that this was far more entertaining than expected and fit in perfectly on the show, especially with the use of the To Be Continued, which was actually a nice touch, spreading it out a bit. The second half was equally insane and the entire thing was simply fun.

Rhea and Raquel surprised me. I like Ripley but my expectations for this weren't super high. This was pretty good, though, and a more than serviceable semi-main and I certainly enjoyed myself in this power battle!

The dude they fired before rehiring as a PR stunt was dressed as Hogan of all people and was in a segment that felt so cringe that it felt like it belonged on Raw.

Ciampa cut a badass promo, sadly to build to a match with the pedo.

The main was fantastic. They have good chemistry together for sure, which helped fuel things along. It was the right length and even the run in from the Scream fan wasn't terribly overdone. I loved the Sally outfit and Io's entrance rocked, too. Rushed at times, but the action and drama made it well worth seeing and a perfect way to close the special!

Flaws or not, this was pure entertainment and a fitting addition to the Halloween Havoc lineage. If you skipped it, consider giving it a go. If you don't want to see the whole thing, at least watch the main event.