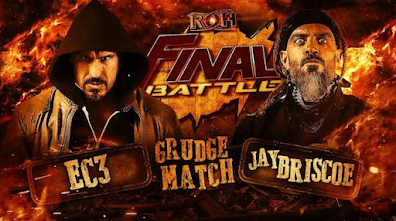 As expected, Ring of Honor has announced the addition of Jay Briscoe versus EC3 for their Final Battle special event.

EC3 has been playing mind games with Jay Briscoe, but things are about to get real.

A grudge match between the two rugged competitors and former world champions has been signed for the Final Battle pay-per-view on Dec. 18.

It’s a rematch from their first meeting, which took place on “Ring of Honor Wrestling” two weeks ago, although that wasn’t really much of a match.

EC3 got in Briscoe’s head in that bout by refusing to look him in the eye as he repeatedly extended his hand to the ROH original for the Code of Honor. The gesture infuriated Briscoe, who was disqualified less than two minutes into the contest for refusing to take his boot from EC3’s throat in the corner.

EC3, who has said that he came to ROH to find out if honor is real, claims that Briscoe’s actions proved it isn’t.

Briscoe was more succinct with his post-match comments. When asked why he wouldn’t uphold the Code of Honor and allowed himself to be disqualified, Briscoe responded: “Because, f**k him. That’s why.”

Briscoe has become so obsessed with EC3 that his brother, Mark, has decided to look for another partner in his quest to become a 12-time ROH World Tag Team Champion.

Will Briscoe solve his EC3 problem at Final Battle? Or will EC3 make a huge statement by defeating the two-time former ROH World Champion on ROH’s biggest pay-per-view of the year? Join us on pay-per-view or streaming for HonorClub to find out!
Wrestling