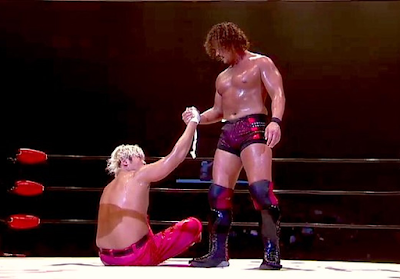 Matches:
1.Ilja vs Noam (09/17) ****
2.Nakajima vs Kenou (09/18) ****1/4
3.Dragon Bane vs Shun Skywalker (09/20) ***1/2
4.Toxin vs Puma de Oro (09/20) ****
5.Marufuji vs Sugiura (09/22) ***3/4
Thoughts:
Up first, Ilja and Noam had a banger on a show that no one watches. I've called the program a soulless version take on the elder contemporaries like PROGRESS and stand by that in the same way that NXT is a largely soulless version of older Ring of Honor. That said, they have the roster there so you know occasionally you'll get something worthwhile and damn, this was worthwhile. Noam looked better than basically ever and Ilja was T-1000. Don't gloss over this one.
Our second pull was a rematch of the kick lords and damn, even the entrances rocked here. Kenou refused to shake Nakajima's hand at the start, adding to the drama. Note that this was from the N-1 Victory series, for additional info. If you want to kill someone, make a drinking game where they have to take a shot everytime a kick is thrown and put them in front of this. But yea, jokes aside, there really was something beautifully artistic yet simplistic to the core here that demands respect. The two exchanged blows for seventeen-minutes with Naka trying to prove himself after joining Kongoh to the unit leader. By the end, Kenou was pinned clean and gave Katsuhiko the sign of respect he wanted and had earned. I had a fantastic time watching this but could see how mileage might vary.
Over to Mexico next for two. Note that IWRG has been one of the more reckless lucha feds during the pandemic. A reminder that GALLI in Illinois has been breaking mandates for those that care. The owner, who named the promotion after himself, mocked the virus months ago and then caught it and nearly died. Then he started running shows while pretending he was being safe. Video and photos prove he is indeed not being safe. Anyway, this is Shun Skywalker's final match in IWRG before he went back to Japan and won the Open the Dream Gate Championship. He stayed in Mexico for about ten months and lost far more than he won, which is typical for excursion trips, but did a pretty good job winning over folks during the time period. On the other side, Dragon Bane has quickly become a top name in IWRG and they've both had a tiny rivalry going so this was certain to be big! I'm pretty sure someone owed someone money and they put in for a very good, borderline great even, battle. Hard hits, flippy shit. Worth seeing.
/
Last up, a time limit draw. Those are hard to do right, in my opinion. Rarely are they bad, but you still often have the issue of seeing two workers clearly drawing things out for the sake of what equates to the ultimate protect finish in the game. It can be more frustrating than a shit finish. Look at what happened recently in NXT. But, when you have to elite dudes like Marufuji and Sugiura involved and it's a tournament match, the chances are much higher that they'll make it work. Luckily, that is true here. Bombs thrown, drama building nicely, and strong story work throughout. While not on the level of some encounters from these two, this was great nonetheless and a worthwhile way to end the roundup.
Some select match review posts, We are STARDOM, more roundups, and the latest editions of RBI and Open the Dungeon Gate coming soon! Thanks for reading and go check out the debut of Saturday Night Slam Masters!
Red's Reviews Wrestling