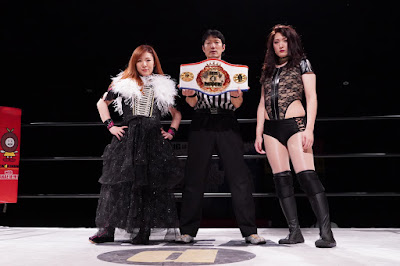 Thoughts:
Ten more for the month of June. Here's part one of the month's review roundup.

The first match this go around saw FTR versus B&B. I see Bunny is no longer aligned with the duo. Bad call in my opinion. She's a solid enough worker that they should use her in ring, especially with the division being diminished a bit right now, but they should still have kept her as a manager alongside her husband and the Everytime I Die badass. Oh well. I'm very happy for FTR as I remember they were amazing in NXT but it seemed they hated "main roster" WWE. After seeing the way they were treated behind the scenes in the dirtsheets, it's hard to argue that they're not better off now and they seem far happier now. As much shit as I give Khan, deservingly I might add, AEW is largely a far better work place that WWE and gets more out of the performers as a result. This match featured a level of intensity and urgency you don't see often stateside and was a truly great contest. Tag team wrestling done right.

Number nine featured Cody defending against Private Party's Quen as his Cena run with the TNT Title continues! Marq put on a fun underdog story before falling to The Elite rep, and I can see why many might be even higher up on this one than I was. I wish Private Party were more consistent as a duo but this was certainly better than expected. Props to AEW for allowing Quen to wear the BLM statement on Dynamite, too.

Arisa and ASUKA tried their best to kill each other for our pleasure and they did an amazing job. Arisa has long been a favorite of mine and ASUKA continues to shine nearly every time I see her. I loved every second, every stuff strike, every near fall. This was fucking awesome and seriously one of my favorite matches I've seen in a while. Once I update my recommendation section, this will be alongside my current MOTY leaders. Go out of your way to see this. NOW!

Admittedly, the next joshi match was far from the same level but still a fantastic defense from the Ice Ribbon crew. It's unfair to compare the two though and a disservice to the talent involved. Check this out, perhaps before the Arisa match, and see another prime example of why joshi is tops!

Staying in Japan, Go Shiozaki and Saito for the GHC strap is next. I like the DDT presentation additions. This was a great, Voorhees clash and worked pretty damn well as a tribute to the almighty Misawa. Go has done very well in this reign, reminding us all of how good he truly is and making dudes like Saito who is past his prime, with all due respect, look like a solid contender. A polarizing affair, but one I personally recommend.

Strike after strike, blow after blow, the ageless monster, Suzuki Minoru, and Big Blue went to battle and proved that they can still work better than a lot of the dudes that are far younger. If you like seeing two grumpy ass old dudes beat the fuck out of each other, you'll love this. Remember, Minoru sees everything you do and will come for you! You've been warned.

Sasha and Bayley head to NXT to defend gold against Nox and Shotzi next. I had decent expectations, but admittedly it was right outside of recommendation levels for me. A better final minute or so might have changed that, but it was still a fairly good, largely enjoyable tag team sprint and everyone looked good, especially Banks.

There will be blood! Abdullah with hair is fucking weird to me for the record. Anyway, this Big Japan three-way was a delightful spectacle exactly as it should be and a very fun death match. It should hit the spot for anyone craving something extreme.

Before closing the set, we have New Japan action! SHINGO has long been a favorite of mine, for many years in fact. He was once my favorite worker in the world, even. He's still in my top five. Here, he faced SHO, a kid I guarantee will be a major player very soon. The two did exactly what I expected and showcased why the New Japan roster is so elite and why these two deserve wide praise in general. I was surprised at the result but not in a bad way. I'd also note that the last minute or so could have been a tad better, but on the whole this was truly fantastic work and full of top shelf entertainment and drama. Another strong recommendation.

Heading home, my favorite former WRESTLE-1 employee challenged Suwama for one of the most important championships in all of wrestling! I have to give the champ huge amounts of credit for showing time and time again that he is still a great worker despite being part of the old guard now. He's done well as champ even if I think others would serve better in the spot. I also have to say I love that All Japan is pushing Ashino and I hope he remains with them for many years. He's young enough that he certainly has a very good run in store if so and I salivate thinking of the title matches he has ahead. This closed the set out nicely with a fun match that lived up nicely to my expectations and another worth checking out if you missed it. Shuji challenged after, setting up a Violent Giants showoff!

July content up soon as well as a chapter of Open the Dungeon Gate.
Red's Reviews Wrestling