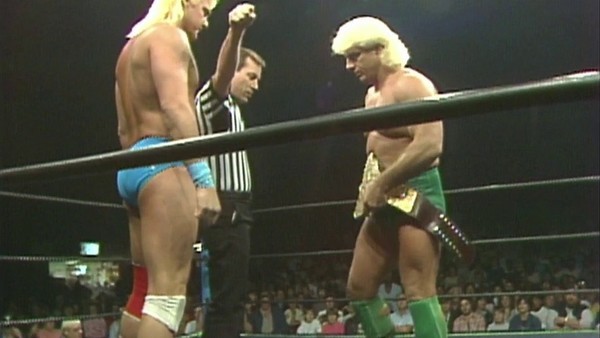 Thoughts:
These are the three Flair/Windham matches that Big Dave gave five stars. While it's a bit of time travel backwards since I just watched/reviewed the big Steamboat and Funk matches, it's never too late to watch some classics. I've seen many suggest these are even better than that set of contests, so let's take a dive. Note I've never, from the best I can tell, seen any of these.

I'd like to make it clear for those who don't know me well that I don't consider Flair a GOAT contender. Same goes to Hogan. Talented, sure, but not a true GOAT. While I respect their contributions and enjoy select parts of their catalog, that's where the brakes start to engage.

The first match was truly fantastic stuff. It's funny, but I saw the worst part of Windham's career and never thought very highly of him until seeing this. He was far away the superior performer in my opinion. This match did remind me of a random pet peeve I have, though. When a wrestler misses a drop kick, why the fuck do they sell it like it hurt terribly when they're taking the same bump they would have if they had landed it. I mean, if it had hit the target they'd jump right up. There was a needless ref bump and, since it's the 80's, the finish was a count-out. While I might have complained a bit just now, this truly is worth going out of your way to see. Oh, and this is the debut of the Big Gold Belt!

Second, Flair and Windham did battle in MACW. These crowds are so lively for the action which is a very nice addition to the action, and they both worked hard while once again telling a strong story. The ref bump in this one was done in a better manner and I prefer the finish, too. While some color would have certainly helped add to the overall experience, this was truly one hell of a show. I loved hearing Dusty at the table, too.

Last from the set, we got to see Windham come so close yet so far once again. While this was the weakest of the bunch, it was still fantastic. The rope break spot added high drama and the concluding stretch in general worked perfectly all things considered. Now, as much as I enjoyed the hell out of these, I will say that I wish it had concluded with a huge pop and Barry holding the championship. Oh well, not much we can do about that.

To put it bluntly; if you've never seen these, make time to fix that mistake. If you have seen them, make time to watch them again.
Red's Reviews Throwback Reviews Wrestling