TNA The Best of the Asylum Years Vol. 1 Part 1 Review 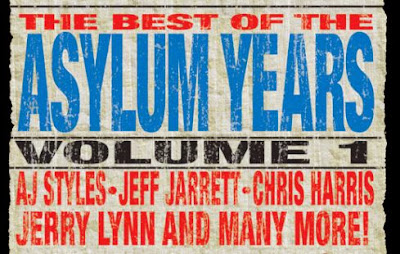 Thoughts:
I had been largely enjoying my time with early TNA, a period I had mostly missed out on, but honestly I like this idea of working through the compilations better. Note that this set covers content from 2002-2004, during their pre-6 sided ring days when they were still stationed out of Nashville.

Up first, Shamrock defending the top prize against Sabu in a...Ladder versus Submission match...with Sabu in ICP logo attire...What is life? Basically, the champ just locked in holds and Sabu did Sabu things including going for a pin in a match without pinfalls. This was a trainwreck. Near the end, Sabu crashed and burned, Shamrock climbed the ladder and nearly pulled the belt down, the lights went out and came back on and then, after coming back on, Malice ran into the ring and climbed up the other side of the ladder. Malice then grabbed the belt after a choke slam and walked away with the belt. What the fuck? Why was that even included? I have all the questions.

One of two things happened. Either the people putting this together picked some matches simple because of the names involved or they wanted to let you know that TNA does have a lot of gems but they also have a lot of bullshit, too.

The second match of the set showcased the X-Division after a package promoting the guys. Jarrett says, "liberry" instead of library. The title defense was the polar opposite of that earlier abomination. The commentary did try to suggest Low-Ki went for a pin, but it just looked like he was trying to communicate the next sequence, an audible, or simply check in with Lynn in general. This was a great ladder match that showcased exactly why this division is what always made TNA special.

A bloody, overbooked spectacle was next complete with about 1000 run-ins. Somehow, it worked, though. I can't say I'd recommend it, especially for those that know my tastes, but this was fun for what it was and worth seeing if you love attitude era, over the top stuff.

One of the sickest dropkicks you'll ever see happened in the next one. This was a good television style, throwaway tag match. Nothing you'd remember a few days later, outside of that missile shot, but pretty nice, either way.

AJ won the Ten Pounds in another overbooked match in the five spot of this comp. Shane Douglas took out Raven midway and Russo hit JJ with a guitar to set up the finish. I don't care much for Russo at all, but this wasn't a terrible match. Decent, but not as bad as some remember. Maybe the run alongside Russo is what sours people on the match itself. I might be the odd man out here, but note I didn't say it was good. Just not terrible.

In one of the few signs of continuation attempts on the set, following the three-way with AJ winning the belt, we followed with Raven and Douglas in a hair versus hair wager match. Like most things involving Raven (and heavyweight TNA content), this was overbooked. That said, I expected it to be. I'm actually a fan of Raven's work, for the record. For a mindless walk and brawl, it was fun. If you liked ECW, you'll like it. Again, not a good match, but a fun one for what it was.

In the eight spot, we had Sting and AJ teaming verus Luger and NWA Heavyweight Champion, Jeff Jarrett. They ran a story here than AJ was trying to prove that he belonged in the same ring with the WCW boys. Luger moved slow and JJ was his cheerleader. Pretty simple stuff overall, but AJ did a good job in his role which helped for sure. Still, this was below average stuff.

Ever wanna see Jarrett get hit by a bunch of fans with leather straps? That's basically all number nine was. It also ended abruptly further making me wonder why it was even here at all.

Mixed along the matches on the disc were several interviews pieced together promoting the company and the period, mostly in well done fashion. I currently don't think I'll be watching part two. Whomever put this together didn't do a very good job. They clearly were trying to put big names on the back of the DVD case to try to sell the collection instead of actually giving the best matches. Instead, I have one or two more matches I'll watch before moving out of the Asylum years and into the next era via comps, random matches, and maybe a full show or two.