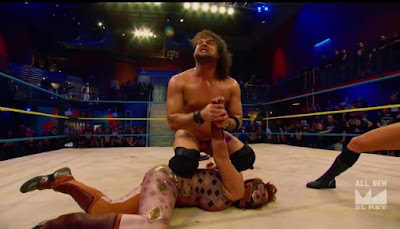 Thoughts:
Putting together the glam squad, and then giving them a title shot right off the bat and having them take the L was certainly an interesting choice. Kross pulling a glove out of his ass and sticking it in Joey's mouth, giving the group another lose was certainly one way to follow that call. It makes sense that the Rabbit Tribe would go over and the blood soaked glove was at least a cool visual. While the match was only a touch above average, it serve a purpose, at least.

In the two spot, Killshot cemented his heel status by being a true dick to Havoc for seven minutes. They worked hard putting in for a good match that set up something that should be even better at Ultima Lucha.

Closing this, we get Marty celebrating his victory over Pentagon. The addition of Reklusa apparently being the one that had traumatized Sexy Star and even took her out was a nice touch. The best thing on this edition followed, though. Marty called out Mariposa to be his first opponent for the title and the two of them beat the fucking hell out of each other. Marty needed a big match to cement his role and he got just that. The arm snap post-match was brilliantly done.

Easily one of my favorite season four matches and one of the best episodes of the season, too.