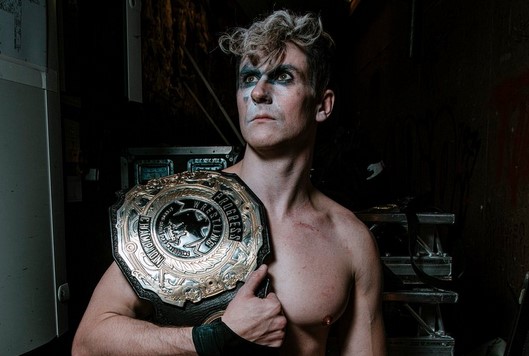 Time to close out the first month of the year with an assorted grab bag of pulls that caught my last minute attention. I'll do this throughout the year to ceremoniously close out a month, and note that there are links below for those who are interested in checking them out!

Thoughts:
Up first, a trip to Saint Louis Anarchy where you can clearly see Stallion and Jay have been watching a lot of classic Japanese wrestling lately. Simply put, this was a great encounter well worth seeing. The dives were lackluster, but everything else largely worked very well and it exceeded all expectations. Never forget that the US independent scene still has a lot to offer.

Next, we jump to MCW, a promotion I don't get to check out nearly enough. Ospreay, my 2019 wrestler of the year, and Dowie James, a dude I sadly know very little about, killed it here. I think longterm visitors to the blog know that I have a few blindspots in wrestling, but not many. So, when I have a chance to fix that a bit, I bite. Well, a Meltzer recommendation sold me on finding this one, and I am thankful for it. Will was awesome here, as usual, and Dowie more than held his own end up. Make sure to go out of your way to catch this one!

The third & fourth pulls are from a small lucha indie fed. Let's be blunt; sometimes, the best lucha action comes from little dinks. I say that, but attendance here looked better than most IMPACT, MLW, or ROH shows.

The first had a nice formula and, like most good 2/3 falls lucha trios matches, they really broke things out in the third fall. While more grounded than expected from something including Aramis, this was pretty dang good and worth seeing.

The second from the event was more spotfest filled and not always the smoothest, but damn if they didn't put on a show. Pure chaos and bodily destruction was on display here. If you enjoy this kind of thing, this is easily one of the better throwaway lucha indie bouts you'll likely see this year. Great shit!

Following those up, we're on to Europe to crown a new top dog of PROGRESS. Not only was the championship on the line, but the main driver here was the ongoing plot of violent romance between Ilja and Cara Noir, which just happens to be one of the best current storylines in the game. I mean, did you see their 2019 outings? It was also one of the best signs of live from PROGRESS last year as they are still trying to rebuild and find their soul again since becoming essentially a feeder system for WWE's D-show. Don't write off the other two competitors here either, though. This Euro-Star packed encounter came off very well and made the belt look sincerely like a true prize in doing so. They worked hard and used the stipulation well, and I recommend this to anyone who thinks PROGRESS is dead. The rise of Cara Noir deserves to be watched, after all.

Next, SEAdLINNNG gave us another gem. Arisa Nakajima deserves a bigger stage, by the way. She's been a favorite of mine for a while now but I feel she is being held back. Here, she faces someone that I still have no respect for whatsoever. This was a stiff battle and a fantastic display and. while I'd have preferred Arisa going over, the use of a time limit draw here aided in the story. I guarantee this will be one of the best women's matches you'll see this year.

Our last pull for the grab bag is a torneo cibernetico from IWRG. These Higher Power FILL matches tend to be pretty fun at times so I was excited to see how this one turned out. Simply put, if you enjoy chaotic clusterfuck insanity, you will surely have fun here. Look past the roughness and you have a pretty fun match. Your mileage may vary and it's worth mentioning that the finish did suck.

Thanks for reading. Expect a February post at some point.
Red's Reviews Wrestling