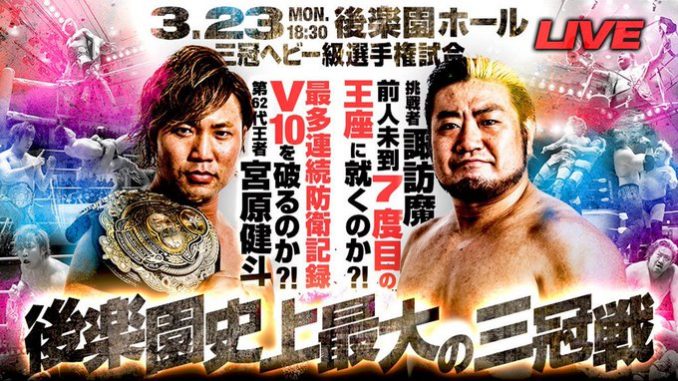 Thoughts:
Missing a Kento title match and still calling yourself a wrestling fan should be considered a true sin and one punishable by death. Luckily for some, him dropping the title here guarantees that they have less a chance at dying soon.

I am a huge fan of Suwama as those who know me can attest. I am aware that many are a bit upset that Suwama was the one to end the current reign of Miyahara versus one of the younger talents they've been building, and I can agree that I would've preferred such a result, but I'd by lying if I said I wasn't excited by the idea of, assumingly, one last run from Suwama. No, the only questionable behavior I see here is this show running with an audience. And, at this point, I'm strongly hoping everyone else stops even running empty arena shows.

Can't do anything about it, so let's just enjoy this match...

As expected, they worked a slowburn that really built nicely. This is exactly the sort of match I had hoped for and they lived up nicely to my high expectations. The false finishes were all well done as was the display of general artistic spirit that All Japan paints beautifully on their canvas with their heartful roster. I am sure Miyahara will reign once more when the time is right, but for now I am excited of the idea of seeing Suwama as the Triple Crown Champion one more time!

Fantastic stuff, well worth watching and nearly a MOTYC.

All Hail the Elder God, the New Era Ace, the only seven time Triple Crown Champion ever....